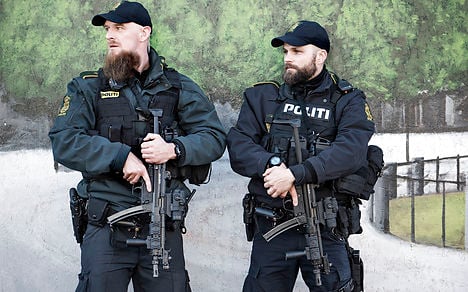 Heavily-armed Danish police officers in Copenhagen on Tuesday. Photo: Bax Lindhardt/Scanpix
The National Police (Rigspolitiet) has raised its alert level to “significantly elevated preparedness”, telling districts nationwide to be extra vigilant following the attacks in Paris that killed at least 132 people on Friday.
“The increase of the alert level occurs as a result of the current unclear situation in many European countries. PET [the Danish Security and Intelligence Service, ed.] has not changed its estimation of the terror threat against Denmark, which continues to be viewed as serious,” a National Police press release stated.
The police said that the raising of the alert level is not something that would have the daily lives of Denmark’s residents.
The Danish National Police last raised its police preparedness level in January following the Charlie Hebdo attacks in Paris. At that point, the level went from level one, “daily preparedness”, on its five-point scale to level two, “slightly elevated preparedness”.
Following the February 14-15 attacks in Copenhagen, police went to level three, “elevated preparedness”. The current change now brings police up to level four on the scale.
The Danish Defence Intelligence Service (Forsvarets Efterretningstjeneste – DDIS) released its national risk assessment report on November 5th, saying that Denmark faces “serious and ever more complicated” threats.
Coming out just eight days before the Paris attacks, the report said that the ability of terror groups like Isis or al-Qaeda to carry out major attacks in the West is “limited”.
Isis has claimed credit for Paris and on Wednesday, French counter-terrorist units carried out a raid targeting the alleged mastermind of the plot. A woman blew herself up by detonating a suicide vest and there are reports that a second jihadist was killed by a police sniper. Follow The Local France for all the latest.