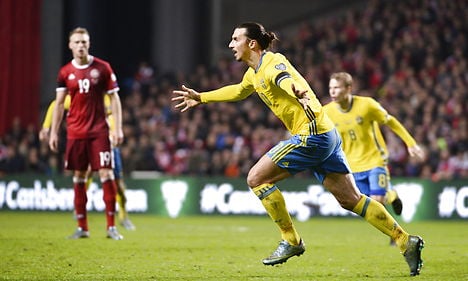 Swedish striker Zlatan Ibrahimovic on Tuesday. Photo: Anders Wiklund/TT/Scanpix
Sweden's star forward Zlatan Ibrahimovic scored a brace as Sweden drew 2-2 with Denmark in Copenhagen to qualify for Euro 2016 with a 4-3 aggregate victory.
Ibrahimovic's goals gave Sweden a commanding 2-0 lead on the night and 4-1 lead on aggregate before a late rally from Denmark saw Yussuf Poulsen and Jannik Vestergaard find the net.
The result ends Danish coach Morten Olsen's time at the helm of the national side. Olsen announced in March that he would step down after his team's run at Euro 2016.