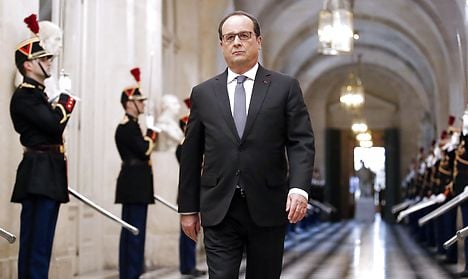 French President François Hollande said on Monday that France was at war with Isis. Photo: Michel Euler/Scanpix
European foreign policy chief Federica Mogherini announced on Tuesday that European defence ministers had agreed to support France, which has intensified bombing raids against the terror group Isis’s stronghold in Syria and Iraq.
“Today the EU through the voices of all the member states unanimously expressed its strongest full support and readiness to give the assistance needed,” she told a press conference in Brussels with  French defence minister Jean-Yves Le Drian.
“France will be in contact bilaterally in coming hours and days to express the support it requires and the EU will ensure the greatest effectiveness in our common response,” former Italian foreign minister Mogherini added.
In making the appeal for military help, Le Drian invoked article 42-7 of the EU treaties that provides for the solidarity of member states in the event of an attack on one of them. It is the first time that a European Union member state has invoked the article, which is similar to Nato’s Article Five which the United States activated after the September 11, 2001 attacks and triggered the alliance's intervention in Afghanistan.
Due to Denmark’s defence opt-out, Danish Defence Minister Peter Christensen was not a part of Tuesday’s meeting in Brussels and Denmark will not formally participate in a EU military mission targeting the terror group Isis, alternately known as Isil. An unnamed Danish diplomat, however, told broadcaster DR that the nation would “assist France in other ways in the fight against Isil, bilaterally”.
Foreign Minister Kristian Jensen said that even though Denmark would not directly answer France’s call, it will continue to contribute to the fight against Isis.
“We have declared that we are ready to send our F-16 jets back into action just as soon as they are militarily deemed ready,” he told news agency Ritzau.
Denmark began dropping bombs on Isis targets in northern Iraq in October 2014 as part of a US-led international coalition. Danish F-16s have flown 547 missions over northern Iraq and have dropped a total of 503 bombs. The F-16s were recently brought back to Denmark for repairs but Jensen has promised that they will return to action in early 2016. Jensen has also expressed an openness for extending the Danish mission to include striking targets in Syria and has repeated that willingness in the aftermath of the Paris attacks that left at least 132 dead.
See also: Sabre-rattling from Denmark after Paris attacks
Since Friday’s attacks in the French capital, a number of Danish political parties have expressed their willingness to get more aggressive in Denmark’s military contributions to the fight against Isis.
Following Le Drian’s request on Tuesday, Jensen said that other European nations should take the lead in coming to France’s aid and combating Isis.
“Denmark is a country that does an awful lot in the fight against Isil in relation to our size. Therefore I believe that there are other countries that should stand first in relation to responding to France’s request,” he said.
Denmark was granted four opt-outs from the 1992 Maastricht Treaty: defence; justice and home affairs; the maintaining of the kroner rather than the euro; and an opt-out on citizenship rules that was cancelled out by the Amsterdam Treaty that took effect in 1999.
Danes will go to the polls on December 3rd to vote on replacing its justice and home affairs opt-out with an opt-in model. A spokesman for government party Venstre was quoted in August as saying that a referendum on ending the defence opt-out should be held “as soon as possible” but no timetable was given.