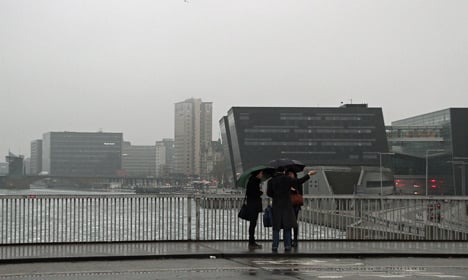 Rain could give way to snow by weekend. Photo: Colourbox
Denmark awoke to cold, rain and wind on Monday and according to weather prognosticators, those sloppy conditions will continue all week before possibly being replaced by the season’s first snow.
The extended forecast from the Danish Meteorology Institute (DMI) calls for rain every day this week with daytime highs around the 10C point. By week’s end however, the colder air that is currently dropping snow on parts of Sweden and Finland will move over Denmark.

DMI's six-day forecast, released on Monday. Image: DMI
“During the course of Friday and next weekend, colder air will hit Denmark from the north and northwest and that could bring winter precipitation,” DMI’s forecast reads.
According to TV2’s forecasters, that precipitation could come in the form of sleet or proper snow.
If snow does hit Denmark by the weekend, it would be in line with recent history. According to TV2, winter’s first snowfall has landed on or before November 21st in 17 of the last 20 years.
What Danes can expect this winter depends largely on which weather source is more accurate. The American weather service Accuweather predicted last month that Denmark should brace for a “core of cold” this winter, while DMI said that November and December would be “wetter and more mild than normal”.