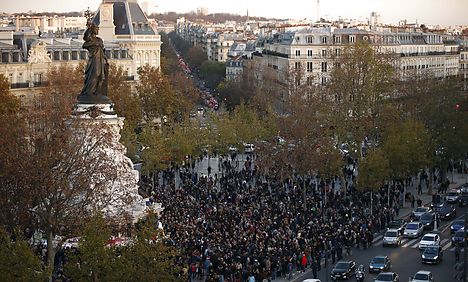 People gather around the Monument a la Republique at the Place de la Republique in Paris, on Sunday. Photo: Patrick Kovarik/Scanpix
Following Friday’s terror attacks in Paris that killed at least 132 people, there are calls from Denmark to step up the nation’s military efforts in the coalition fight against the terror group Isis.
For the latest on the Paris attacks, visit The Local France
Søren Espersen, a senior Danish People’s Party spokesman and the head of parliament's Foreign Policy Committee, created a stir on Sunday by saying that the West should start bombing civilian targets because Isis “hides behind women and children”.
His comment led to an official police report for inciting terror and a later attempt by Espersen to say he had been misunderstood, but his remarks were not the only ones to up the war rhetoric in the aftermath of the France attacks.
See also: Danish MP: 'Bomb women and children'
A spokesman for ruling party Venstre said it is time to completely eliminate Isis, alternately known as the Islamic State, ISIL, IS or Daesh.
“We have thus far been in the situation of trying to stop IS’s advance. But with the terror attacks in Paris, IS has declared war against the whole of Western society and we must therefore not put all of our efforts into fighting IS. Now it is about wiping them off the surface of the Earth,” Michael Aastrup Jesen told Politiken.
Naser Khader, one of Denmark’s most respected voices on Syria and a spokesman for the Conservatives, said that the West needs to put boots on the ground to fight Isis.
“Many say that we have had bad experiences with sending troops into Iraq and Afghanistan, but we can’t continue to refer to that because we will have more attacks like the ones in Paris,” he told Politiken.
Speaking to Ekstra Bladet, Khader said the West needs to “bomb Islamic State back into the Stone Ages”.
There is very little political support for sending Danish troops into Iraq and Syria, but signs point to a willingness to extend Denmark’s aerial campaign into Syrian territory.
Denmark joined the international coalition fighting Isis in October 2014. Danish F-16s have flown 547 missions over northern Iraq and have dropped a total of 503 bombs. The F-16s were recently brought back to Denmark for repairs but Foreign Minister Kristian Jensen has promised that they will return to action in early 2016. Jensen has also expressed an openness for extending the Danish mission to include striking targets in Syria.
On Monday morning, Jensen told TV2 News that the Danish jets will be back in action “as soon as possible because it is an important part of the efforts against the Islamic State”.
“If it is necessary, we will also consider using the fighter jets in Syria,” he said.
French warplanes pounded the de facto Syrian capital of Isis, the city of Raqqa, on Sunday, destroying a command post and a training camp.