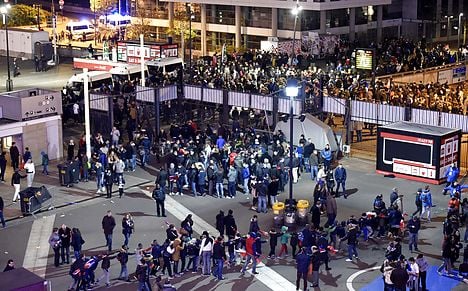 Fans leave the Stade de France, one of six locations hit by terror, on Friday. Photo: Franck Fife/Scanpix
As was the case when the two teams faced off in Friends Arena in suburban Stockholm on Saturday, Tuesday’s Euro 2016 playoff match between Denmark and Sweden will be played under heightened security.
The Danish Football Association (DBU) and local police made the decision to increase security at Copenhagen’s Parken following Friday’s attacks in Paris, which included suicide bombs at the Stade de France during a friendly between France and Germany.
“We always have focus on the security at games in Parken, but we have chosen to increase the security measures at all entrances to the stadium in light of the weekend’s tragic events in the French capital,” DBU’s Jakob Høyer said on the association’s website.
Høyer said that fans attending the match, should expect delays.
“The increased security can be expected to result in longer waits at the entrances to Parken so therefore we encourage all fans to turn up earlier to ensure the best football experience for everyone,” he explained.
Denmark needs to win the game while for Sweden a draw would be enough to see them through to Euro 2016.
For all of the latest on the Paris attacks check out The Local France