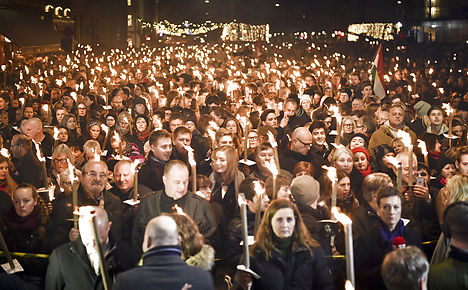 Police estimated the crowd at 15,000 to 20,000. Photo: Nils Meilvang/Scanpix
Up to 20,000 people, among them Prime Minister Lars Løkke Rasmussen, gathered for a candlelight vigil at the gates of the French embassy in Copenhagen on Sunday evening to mourn the victims of the Paris attacks, police said.
In an address to the assembled crowd, the PM expressed Danes' solidarity with the French people.
“The attack on Paris – the city of cities, the city of lights, the city of love – was an attack on all of us,” Rasmussen said. PM Lars Løkke Rasmussen at the Sunday vigil. Photo: Nils Meilvang/Scanpix
Denmark too has suffered attacks by radical Islamists. On February 14, extremists killed a Danish filmmaker outside a cultural centre where a debate on Islam and free speech was taking place. Hours later a Jewish man was killed at a synagogue, as a bar mitzvah was being celebrated outside.
The mourners on Sunday, some of them dressed in the French blue, white and red colours, held a minute of silence.

“What is the strongest response we can have? To keep on living, and to refuse to be intimidated. If we no longer dare to sit at a cafe terrace, then we have lost. We insist on [defending] democracy and the joy of living,” said Rasmussen, visibly moved.
France's ambassador to Copenhagen, Francois Zimeray, was also there.

“For us it is a strong sign of the Danish people's solidarity with France. They are fighting the same battle … they are fighting for the same values,” he said.
The Danes know … that they also run the same risks,” he added.
The vigil, which was convened by the youth wings of all the country's main political parties, is the second in as many days in the Danish capital.
“I am here because I think it is very important for us all to show that we are holding out against terror,” said Zahraa Khanjer, a marketing consultant wearing a hijab or headscarf. “I am here both as an individual and as a Muslim.”

Hundreds of Danes on Saturday, including French-born Prince Consort Henrik, gathered to lay flowers at the entrance of the French embassy.
Since Friday's attacks in Paris, there has been an outpouring of solidarity across the world, with emotional renditions of the French national anthem sung in cities from Dublin to New York.
Danish newspaper Jyllands-Posten in 2005 published cartoons of the Prophet Mohammed, sparking deadly protests in the Muslim world. There have been several foiled terror plots against the newspaper since. Then in January this year French satirical magazine Charlie Hebdo, which reprinted the Danish cartoons in 2006, came under attack by jihadists. Twelve people in and around the offices of the magazine were killed.