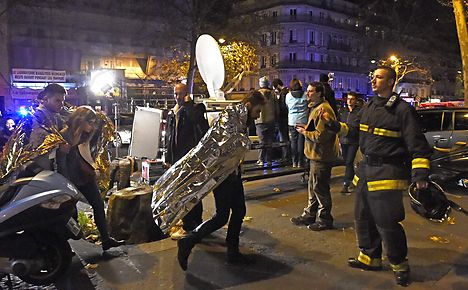 People wearing survival blankets walk by a rescuer near the Bataclan concert hall in central Paris, early on November 14th. Photo: MIGUEL MEDINA
THE LOCAL FRANCE: Follow the latest on the Paris attacks
The Danish National Police and the Danish Security and Intelligence Service (PET) said that security officials would be on high alert following Friday’s attacks in France.
“The National Police has contacted all police districts, which have sharpened their attentions after the attacks in Paris,” Police Chief Jens Henrik Højberg said.
See also: Danish PM: Paris attacks 'a dark day for Europe'
Both agencies are closely following the aftermath of the Paris attacks, which terror group Isis has claimed to be behind.
“PET continues to view the terror threat against Denmark as serious and Denmark is already in a heightened state of preparedness,” a police press release said.
Across the Øresund in Sweden, officials were increasing security “around certain objects”. Security was also being stepped up ahead of Saturday's football match at the Friends Arena in Stockholm suburb Solna, which will see the Swedish footballers take on the Danish team in the first leg of the Euro 2016 qualifiers.
“Throughout the day we will take extra security measures, which ones we will not comment on now, but we're going to increase security from an already high level, so that all visitors can feel safe,” Anders Sigurdson, head of security for the Swedish Football Association, told sports website Svensk fotboll.