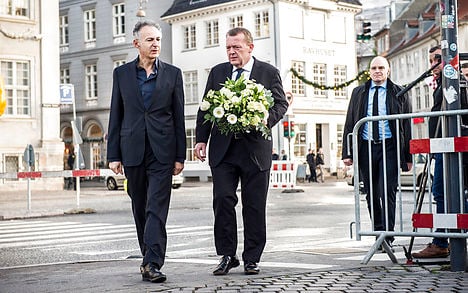 Danish PM Lars Løkke Rasmussen and France's ambassador to Denmark, François Zimeray, near the French Embassy in Copenhagen. Photo: Niels Ahlmann Olesen/Scanpix
After at least 127 people were killed in at least six separate attacks in Paris on Friday night, Danish PM Lars Løkke Rasmussen expressed his condolences and solidarity with the French people.
For all the latest on the attacks, go to The Local France
The PM first reacted with a tweet saying he was “appalled by the attacks in France” and an expression of sympathy to the French:

“We have in the course of the evening and night been witness to an indescribable, cold-hearted terror attack. Well over 100 innocent people were brutally murdered on a completely normal Friday night in Paris,” Rasmussen then said in an official statement.
“The extent of the attacks in Paris is incomprehensible and fills me with deep sorrow. It is a dark day in Europe,” he continued.
“I strongly condemn the perpetrators who are behind this attack on French society and have expressed our sympathies with the French people to President Hollande. The Danish authorities are following the situation in Paris closely,” he concluded.
Denmark will fly its flags at half mast on Saturday in honour of the attack's victims.
Other world leaders react
Reaction and condemnation of the Paris attacks were swift amongst world leaders on Friday night.
US President Barack Obama pledged immediate assistance to French authorities, while condemning the latest tragedy on French soil.

As of Friday, Obama refused to speculate on who might be responsible but said the United States stands ready to provide whatever assistance may be necessary and vowed to work with the French and nations around the world “to bring these terrorists to justice, and to go after any terrorist networks that go after our people.”

A spokesperson for German president Angela Merkel said that she was 'deeply shocked' by the events of the evening, and offered her “sympathy and solidarity.”

Austria's Foreign Minister, Sebastian Kurz, was one of the fastest to tweet his support, saying “We stand with #France.”

Deeply shocked by horrible events in #Paris tonight. My condolences for the families of the victims – we stand with #France.

British Prime Minister David Cameron tweeted: “I am shocked by events in Paris tonight. Our thoughts and prayers are with the French people. We will do whatever we can to help.”

The Swedish Foreign Minister, Margot Wallström, tweeted: “Horrible news from Paris tonight. Our thoughts and support goes to France and all those affected by the deadly attacks.”

Donald Tusk,  President of the European Council, also expressed his shock and sympathy.

I follow with shock the attacks in Paris. My full solidarity & sympathy with the French people and authorities

Jean-Claude Juncker, the President of EU Commission, expressed his solidarity with the people of France.

I am deeply shocked by the events in Paris. We stand in full solidarity with the people of France.

The regional government of Catalonia said it is “By the side of the French people in the face of this terrorist barbarity and fanaticism.”

Spain's government released a statement: “Today more than ever, we reiterate our categoric repulsion before this type of terrorist act and share with the government of France and the French people our closeness and solidarity. We are all united against terror. Today we are all with Paris.”

The Spanish Prime Minister Mariano Rajoy tweeted: “Shocked at the news coming in from Paris. France has by its side the Spanish people in these very difficult times. MR”