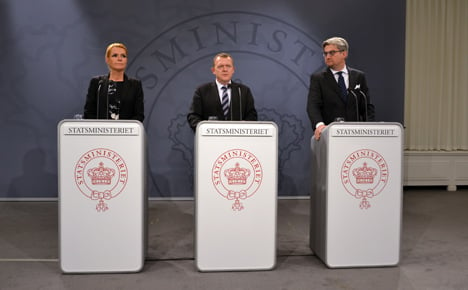 (L-R) Integration Minister Inger Støjberg, PM Lars Løkke Rasmussen and Justice Minister Søren Pind announced the new package of initiatives on Friday. Photo: CO Media
PM Lars Løkke Rasmussen, flanked by his integration and justice ministers, announced on Friday that his government will allow authorities to house refugees in tents, shorten refugees' residence permits and make them wait three years before bringing their family to Denmark.
Rasmussen introduced 34 initiatives spread across five main areas: changes to the conditions faced by asylum seekers, better options for sending rejected asylum seekers out of the country, new housing and detention options for immigration authorities, new possibilities for police to control the arrival of foreigners and relaxed requirements for municipalities in accommodating refugees. The full list of initiatives can be read here (in Danish).
Among the government’s plans is the establishment of tent camps to house some of the 13,000 asylum centres currently spread across 33 different municipalities.
To begin with, there will be tents erected in Thisted next week, which primarily house single male refugees.
“The Danish Immigration Service is working to find accommodation for the growing number of asylum seekers, including in the form of regular housing but also though the use of mattress solutions in schools, community centres, etc,” the government’s plan reads.
“Beyond that, there is work to establish a large number of extraordinary accommodation spaces at the Danish Emergency Management Agency’s (Beredskabsstyrelsen) centres and defence barracks as well as the erection of tents,” the plan continues. PM Lars Løkke Rasmussen announcing the new package on Friday. Photo: Davut Çolak/CO Media
Shorter permits, longer family reunification times
Rasmussen also announced plans to shorten the length of residence permits given to refugees. UN convention refugees will see their permits shortened from the current five years to three, while the residence permits for refugees granted regular protection status will drop from five years to two.
Those on the previously-introduced temporary residence scheme will still be granted one year permits but will only be able to renew them for one year at a time instead of the current two years.
Among the government’s other plans is to further delay the ability of refugees to bring their families to Denmark under the family reunification scheme. The previous Social Democrat-led government had already implemented a one-year waiting period, but Rasmussen’s cabinet wants to extend it to three years.
In announcing the new measures, Integration Minister Inger Støjberg said that the number of refugees in Denmark “challenges our immigration authorities, our municipalities and our society in general”.
The further tightening of Denmark’s asylum policies are thus designed to make the country a less desirable destination.
“Denmark should not be a magnet for asylum seekers,” she said.
In a Wednesday press conference previewing the coming changes, Rasmussen said that Denmark planned to take its asylum policies “to the edge of international law”.
On Friday, he said that he was confident that the new measures would not violate international conventions, even though the UN Refugee Agency and others have sharply criticized the existing one-year waiting period for family reunification.
“It is definitely our believe that this is in accordance with international conventions. We have worked with this question for a long time and believe that what we are presenting today respects our international obligations,” Rasmussen said.
Justice Minister Søren Pind said the three-year waiting period for family reunification is “tenable and within the European Convention on Human Rights”.
The extended waiting period for family reunification applies to those refugees who have been granted temporary residence as part of the scheme introduced last year for refugees fleeing the civil wars like the one in Syria.
The government's new plan comes after Denmark experienced an all-time single-month high for refugees in October, when an estimated 3,500 sought asylum. Figures from the Danish National Police also showed that at least 10,900 people crossed into Denmark between November 2nd-9th. The number is significantly higher than the 3,500 to 6,000 who have arrived in recent weeks.
However, the vast majority of those refugees were just passing through to elsewhere, primarily to Sweden, which received more asylum applications last week than Denmark did through the first nine months of 2015.
Rasmussen has said that Denmark has no plans to implement border controls following Sweden's decision to do so.