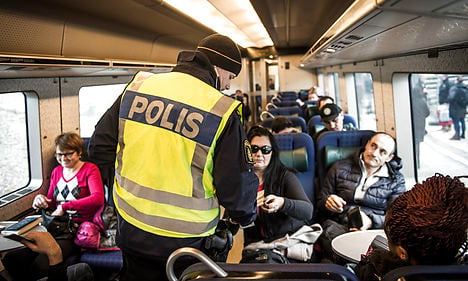 Swedish officers check IDs on a train arriving from Denmark. Photo: Asger Ladefoged/Scanpix
Some 15 police officers boarded a train at Hyllie station in Malmö, the first stop on the Swedish side of the bridge from Denmark, shortly after noon. At least 30 refugees, with small children, were asked to get off the train to formally apply for asylum in Sweden.
“They lacked permits to be in the country and did not want to seek asylum,” Leif Fransson of the southern regional police told the Dagens Nyheter newspaper.
Regional public transport operator Skånetrafiken urged people to allow plenty of time for travelling as heavy delays were expected. But eye witnesses reported that the ID checks were being carried out in a relatively calm and swift manner, taking no more than a few minutes.
See also: PM: Denmark will not pursue border controls
Press spokeswoman Ewa-Gun Westford said the controls required a large police presence. She told the AFP news agency: “We will try to be on all trains, at least to start with, and then we will have to make an assessment (…) We are in a situation today where we assess this operation hour by hour.”
Sweden is also carrying out border checks on arriving ferries and private vehicles. Swedish police await the arrival of a ferry. Photo: Mathias Løvgreen Bojesen/Scanpix
Sweden’s decision to reinstate border checks is temporary and valid for 10 days, but can be renewed for up to six months under Schengen regulations on free movement.
Swedish police officials said on Thursday that they were preparing to have the controls in place for six months, though Sweden has made no such request yet.
Danish PM Lars Løkke Rasmussen has said that Denmark has no plans to follow suit and institute its own border controls.
Refugees arriving in Sweden from Denmark and elsewhere without valid identification documents will be allowed to seek asylum, but those who do not want to do so – for example those who simply want to transit through Sweden – will be refused entry.
See also: Is Sweden closing its borders (no, it's not) Police officers check a bus that arrived by ferry from Denmark. Photo: Nils Meilvang/Scanpix
“This is not a fence. We need to make sure that we have control (…) We have to make sure we know who is coming to Sweden,” Prime Minister Stefan Löfven insisted.
“Introducing border controls is not to prevent people from coming to Sweden to seek asylum,” the head of the Swedish Migration Agency Anders Danielsson meanwhile told Swedish news agency TT.
“On the contrary. They will have their case heard, but we need to (regain) control,” he added.
Commuters and tourists entering Sweden from Denmark are being told to bring their passports or, if a EU citizen, a national identity card. Nordic citizens are still allowed to cross the border without a passport, under a passport-free zone agreement separate to Schengen, but must be able to identify themselves as such.
The estimated 30,000 commuters who cross the Øresund Bridge between Copenhagen and Malmö by car and train every day are likely to face some delays. But only randomized controls will be carried out; it would be near impossible to check everyone in such a traffic intensive area.
“We're working together with the police and hope things are going to run as smoothly as possible,” Øresund Bridge press spokesperson Sanna Holmqvist told the TT newswire on Thursday.