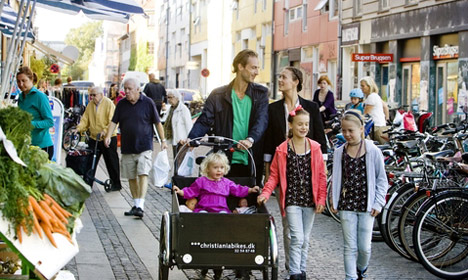 A global comparison puts Denmark at the very top but a Nordic equality database suggests there is room for improvement. Photo: Kasper Thye/Visit Copenhagen
Pollsters YouGov quizzed people from 24 countries in a survey published on Thursday, and found that the Danes were the third most progressive when it came to their approach to gender.
Danes scored a net average of 62 in a series of ten questions, putting them behind just Sweden and Finland. Image: YouGov
The research was carried out by offering a series of statements to which respondents could agree or disagree.
Several of the statements were conservative, such as 'it is unattractive for women to express strong opinions in public', while others were more progressive, such as 'creating more opportunity for women should be one of the world's top concerns' and 'women and men should generally get equal pay'.
The survey found that countries in the Middle East saw huge differences from the global averages. For example, 74 percent of respondents from the area agreed that “a wife's first role is to look after her husband”.
The YouGov poll showed a significant gap between the attitudes of Danish men and women. While women had a net average of 68, the men were at just 56, dragging down Denmark’s overall score.
Lagging behind in the Nordics
That difference between the sexes is also reflected in a newly-launched Nordic Council database measuring gender equality indicators in Denmark, Finland, Iceland, Norway and Sweden.
Danish men are at the very bottom of the Nordic pile when it comes to contributing around the house, using just two hours and 15 minutes per day. Danish women do household chores for a full extra hour each day, although that too was the lowest among the compared countries.
The database also shows that Denmark lags behind when it comes to women filling leadership positions in the workforce. Just 27 percent of Danish leadership posts are filled by women, compared to 37 percent in Iceland, 33 percent in Norway and 30 percent in Sweden.
Danish men also take the shortest parental leaves amongst the Nordic lands. Unlike the other countries, Denmark does not earmark part of its generous parental leave for fathers instead leaving it up to the couples themselves to decide how to split the time.
Denmark’s equality minister, Ellen Trane Nørby, told Politiken that Denmark prefers not to achieve equality through legislation.
“In Denmark, we have the same goal as the other countries: to promote equality. But we have chosen a different model and we believe that it is the best,” she said.
The Nordic Council’s database also had bright spots for Denmark, including the fact that it is the Nordic country with the smallest wage gap in the Nordics, with men out-earning women by 14 percent.