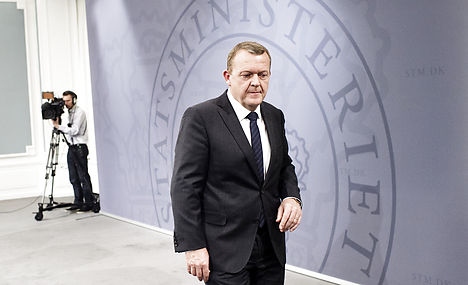 PM Lars Løkke Rasmussen leaves Wednesday's press conference after promising a new set of refugee restrictions. Photo: Bax Lindhardt/Scanpix
At a Wednesday press conference, PM Lars Løkke Rasmussen said his government will introduce new initiatives aimed at bringing down the number of refugees and migrants who come to Denmark.
“Far too many immigrants are coming to Europe and to Denmark. It is increasing day by day. Denmark cannot remain open for everyone,” he said.
Without getting in to the full details of his plan, Rasmussen said his government will shorten the length of residence permits, make family reunification more difficult, further cut the benefits given to refugees and asylum seekers, and make it harder for them to enter Denmark in the first place. The PM also said that Denmark would increase its efforts to send rejected asylum seekers out of the country.
The full details of the government's new initiatives will be announced on Friday.
Rasmussen repeatedly said that “quantity matters” and that the number of refugees who enter Denmark cannot continue to rise.
“We must be honest and say that we have not have great success with our integration polices. For every extra person who comes here, the challenging of integrating them will become greater and greater,” he said.
The prime minister’s press conference came after Denmark experienced an all-time single-month high for refugees in October, when an estimated 3,500 sought asylum. Figures from the Danish National Police also showed that at least 10,900 people crossed into Denmark between November 2nd-9th. The number is significantly higher than the 3,500 to 6,000 who have arrived in recent weeks.
However, the vast majority of those refugees were just passing through to elsewhere, primarily to Sweden, which received more asylum applications last week than Denmark did through the first nine months of 2015.
But with Sweden, Norway and Germany all implementing new tougher policies on refugees and the numbers of new arrivals showing no sign of tapering off as winter approaches, there needs to be “robust” policies that he said will take Denmark’s immigration laws “to the edge of international laws”.
“Denmark is a society based on the rule of law and we must abide by international conventions, But we must also take care of Denmark. It is my government’s belief that there is room for tightening,” he said.
Denmark has already sought to limit the number of refugees by issuing temporary residence permits, delaying family reunifications and slashing benefits for asylum seekers. It has also placed adverts in Lebanese newspapers to discourage migrants from choosing Denmark and recently announced new family reunification rules for all immigrants.