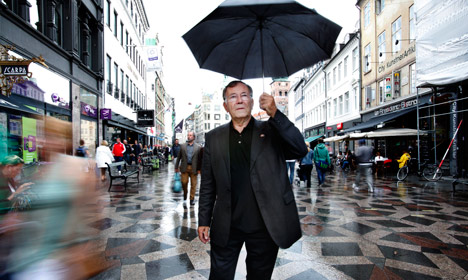 Architect Jan Gehl is one of the featured speakers. Photo: Sandra Henningsson
Last year's TEDxKEA event was the first university TEDx to ever be held in Denmark. This year, the student organizers are back for their second go-around with an event they have labelled 'Evolve'.

The day of talks will feature a wide range of topics and speakers, from the man behind the world’s longest pedestrian street Strøget, Jan Gehl, to women’s rights activist Khatera Parwani.

Other prominent speakers on the day include Hummel owner, Christian Stadil, 'Dane of the Year' and anti-food waste advocate, Selina Juul, and celebrated scientists such as astrophysicist Anja Cetti Andersen and evolutionary biologist Eske Willerslev. Danish astronomer and astrophysicist Anja Cetti Andersen, one of 12 speakers at this years TEDxKEA event

Organizers say that this year's event will explore topics such as big data, the circular economy, human evolution and the origins of stars and planets.

The event will be put on by a multinational team of over 30 volunteers.

“We have set out to prove what young people can accomplish and celebrate what the city of Copenhagen can offer our generation. So it was only natural to place our flag in one of Copenhagen’s landmarks, which is a hub for the students of this city,” lead TEDxKEA organiser Doug Costello said of this year’s ambitions.

“It is our aim to ignite imaginations and help our generation evolve to reach its incredible potential,” he added.

Operating under the motto “ideas worth spreading”, TEDx talks are local and self-organized events.

TEDxKEA Evolve will be held on November 21st at Copenhagen's Black Diamond. More information can be found here.