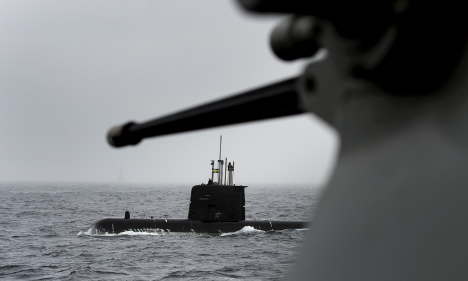 The 56-year-old has promised to visit all Nato member states during his term, as well as non-members such as Sweden which have close ties to the intergovernmental military alliance.

Speaking to reporters on Tuesday morning, he said that Nato was stepping up its presence in the Nordic region as a result of growing Russian military activity in the area and in response to watching the country “use force to change the borders of Ukraine”.

“Nato does not seek confrontation with Russia. We are looking for cooperation and dialogue, but that cooperation must be based on predictability and strength,” he said.

Stoltenberg's trip coincides with a regular two-day meeting of the Nordic defence cooperation group, Nordefco, attended by representatives from Sweden, Norway, Iceland, Finland and Denmark as well as partners from the Baltic states. Polish and UK officials have also been invited to the talks.

Sweden will hand over the rotating presidency of Nordefco to Denmark, following the discussions.

Russia’s presence in the the Nordics is expected to be a key focus as their debates continue, amid ongoing jitters surrounding recent intrusions from the eastern country.

In October 2014, a foreign submarine – suspected to be from Russia, although this was never confirmed – was spotted in Swedish waters just outside Stockholm. A number of Russian planes have also been spotted in or close to Swedish and Danish airspace over the past year. Both Swedish and Danish intelligence services have reported that Russia is one of the biggest threats in the region. The visit from the new Nato chief also comes as public support for Sweden joining the organization is growing, according to recent polls.

In September, 41 percent of Swedes said they thought their country should join Nato while 39 percent remained against it. A similar survey in May stated that just 31 percent of respondents were in favour of Nato membership.

Sweden's ruling centre-left coalition – made up of the Social Democrats and the Green Party – is historically against Nato membership. However, there have been indications in the past year that the Scandinavian nation is moving closer to joining the defence alliance.

In April, Sweden, Norway, Denmark, Finland and Iceland announced far-reaching plans to extend their military cooperation. Two months ago, Swedish newspaper Svenska Dagbladet suggested that Sweden could get involved with a UK-led Nato-linked force that could be deployed in the event of war in the Baltics, although this was later denied by Sweden’s Defence Minister Peter Hultqvist.