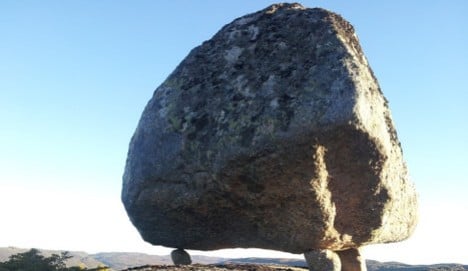 The 'floating stone' found in Vest-Agder. Photo: Mogens Eskesen
Danish nurse Mogens Eskesen, who works at a hospital in the southern Norwegian city of Kristiansand, was out hiking near the village of Ljosland in Norway’s Vest-Agder country, when he came upon the remarkable stone only 15 minutes walk from where he had parked his car.
“I’ve never heard anyone saying anything about the stone,” he told The Local. “It might be that many people have seen it before me, but I haven’t seen any pictures of it.”
He said he believed the stone had probably been lying there undocumented for thousands of years.
“It has been placed there by the ice, and the small particles have been blown away during the years, and now there are only three small stones lying underneath,” he said. “I think it’s been like that for maybe 10,000 years.”
Ole Fridtjof Frigstad, a retired geologist, told NRK that the find was “wonderful” and that Eskesen was in all probability correct.
“The ice melted down here about 12,000 years ago, so this must have happened at the time the ice melted away,” he said.