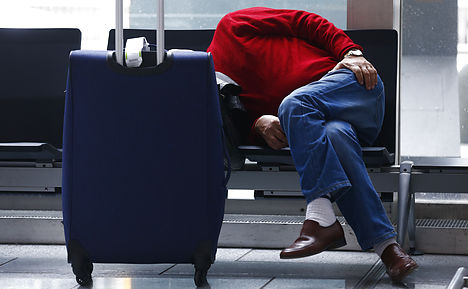 A stranded passenger sleeps in Frankfurt airport on Friday. Photo: Ralph Orlowski/Scanpix
A total of 14 flights to and from Frankfurt were grounded at both the Copenhagen and Billund airports after Lufthansa cancelled 929 flights on Monday.
The cancellations include flights operated by the Star Alliance, of which both Lufthansa and Scandinavian Airlines (SAS) are members.
Monday’s cancellations follow 12 other scrapped flights at Danish airports on Saturday.
The German strike has been affecting air traffic across Europe since it began on Friday amid a long-running battle over savings aimed at fending off competition from low-cost rivals.
“We regret that it has come to this escalation, but negotiations (with management) have reached a point where there is no alternative but to strike,” said a statement by the flight attendants' union UFO when it launched the industrial action last week.
The group's subsidiaries Germanwings, Eurowings, Lufthansa CityLine, SWISS, Austrian Airlines, Air Dolomiti and Brussels Airlines are not being targeted by the strike.
Lufthansa said on Friday that it “regretted” the union's action and apologized to passengers, saying the short notice of the strikes made it difficult to inform them in time and enable them to make alternative travel arrangements.
“We will do everything possible to keep disruption to a minimum,” it said.
It is first time that cabin staff have staged walkouts in the nearly two-year-long dispute.
UFO is demanding the current system of early retirement provisions remain unchanged, but Lufthansa argues that the system is too expensive as it faces cut-throat competition from low-cost operators such as Ryanair and Easyjet.
The four daily flights between Copenhagen and Munich are unaffected by the strike, and the Aalborg-Frankfurt route is also operating as normal.