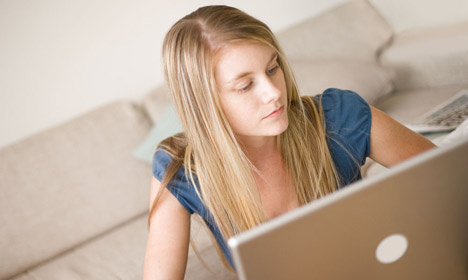 The study found that people who took a Facebook break felt happier and were less sad and lonely. Photo: Iris/Scanpix
Checking Facebook gives us instant gratification in the form of new likes and friend requests and provides a virtual one-stop shop for keeping up with the people we care about and the news we’re interested in. But does it also make us unhappy?
A new study from the Happiness Research Institute suggests that it might.
The institute conducted an experiment on 1,095 people in Denmark, asking half of them to refrain from using Facebook for one week. The participants were asked to evaluate their life satisfaction on a scale of one to ten both before and after the one-week experiment and the researchers found “a significantly higher level of life satisfaction” amongst those who did not visit the social media behemoth.
The control group, which continued to use Facebook as normal during the week, gave an average 7.67 ranking to their life satisfaction before the experiment. At by week's end, that had barely changed to 7.75. The other group, however, saw life satisfaction shoot up from 7.56 to 8.12 after their Facebook-free week.
Not only did they feel happier with their lives, they also reported an increase in real-world social activity and were significantly less angry and lonely than the Facebook users.
Happiness Research Institute CEO Meik Wiking said that the experiment’s results were largely down to people’s tendency to compare themselves to others. And in the world of Facebook, where 61 percent of the experiment participants said they prefer to post their “good sides” to the site and 69 percent prefer to post photos of the “great things” in their lives, comparisons to others can be misleading.
“Facebook distorts our perception of reality and of what other people’s lives really look like. We take in to account how we’re doing in life through comparisons to everyone else, and since most people only post positive things on Facebook, that gives us a very biassed perception of reality,” Wiking told The Local.
Because people are more likely to post photos from their latest holidays than a typical Monday at the office, or to write more status updates about their children’s achievements than their unwillingness to eat their vegetables, Facebook quickly becomes a false world filled with only life’s brighter sides.
“If we are constantly exposed to great news, we risk evaluating our own lives as less good,” Wiking said.
The institute likens Facebook to “a non-stop great news channel” and a “constant flow of edited lives” that paint false pictures.
Wiking said that although he was surprised by the experiment’s results, he would have liked to have seen the break last longer than one week, as that may not be a long enough time to cancel out the distortion that has already happened.
“You would think that over time, the effect would be larger. But on the other hand, if you do log off Facebook for a longer period of time, that might enhance one’s sense of isolation. Facebook is an infrastructure for social events so if you completely log out, you may miss out on some of these social activities,” he said.
Despite the study showing that taking a break from Facebook increases happiness, social activity and concentration levels, Wiking acknowledged that most people will continue to use the social media. To put it another way, we will willingly carry on with an activity that does’t make us happy. Why people continue negative behaviours is conundrum that researchers have been “trying to crack for decades”, he said.
After all, as he says, “it’s also common wisdom that smoking is bad, yet we continue to do it.”
But Wiking hopes that the experiment’s results will get people to think about their own Facebook use, or to at least remember that not everything is as it seems within one’s news feed.
“There can also be positive benefits from Facebook and social media, but I think the real thing to always be aware of is the effect it has on our perception of reality. This constant flow of great news we see on Facebook only represents the top 10 percent of things that happen to other people. It shouldn’t be used as the background for evaluating our own lives,” Wiking said.
More about the Facebook experiment can be found here.