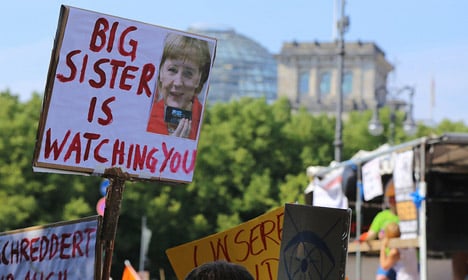 An anti-surveillance demonstration in Berlin in 2013. Photo: mw238/Flickr
According to a report in German newspaper Der Spiegel on Saturday, the German intelligence agency BND spied on Denmark and other allies including France, Sweden, Italy, Spain and Britain.
BND has already been accused of eavesdropping on officials at the French foreign ministry and presidency, as well as the European Commission, on behalf of its US counterpart, the NSA.
Public radio RBB and Spiegel Online had earlier claimed that the BND had also spied on its own account on several embassies and administrations of “European states and allies”.
Spiegel, without giving any sources, said Saturday that “the BND had systematically spied on 'allies' across the world, including on the interior ministries of the United States, Poland, Austria, Denmark and Croatia.”
It said the spying targets included the US delegation at the European Union in Brussels and the UN in New York, the US Treasury, and several embassies in Germany — including those of the US, France, Britain, Sweden, Portugal, Greece, Spain, Italy, Switzerland, Austria and the Vatican. It also spied on the Geneva-based International Committee of the Red Cross and Oxfam, Spiegel said.
Denmark’s justice minister, Søren Pind, said he had “noted” Der Spiegel’s story but didn’t plan to take any action.
“I have obviously noted the story but I do not immediately, upon the basis of a newspaper article, plan to do anything about it,” Pind told news agency Ritzau.
Søren Espersen, a spokesman for the Danish People’s Party, also viewed the Germans’ alleged spying undramatically.
“Everyone spies on everyone. That’s what they do. There is nothing odious in it. I would be very disappointed if we didn’t also do it to our other friends,” he told Ritzau.
Germany expressed outrage when information leaked by former NSA contractor Edward Snowden showed that US agents were carrying out widespread tapping worldwide, but the BND soon came under fire itself over claims that it had carried out spying on European allies on behalf of the NSA.
Belgium and the Netherlands in June launched probes into the claims of German espionage.