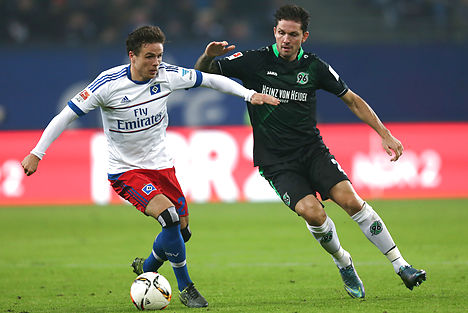 Leon Andreasen (right), seen here playing for Hannover, will miss the showdown with Sweden. Photo: Axel Heimken/Scanpix
Denmark midfielder Leon Andreasen will miss his country's Euro 2016 play-off tie with Sweden after cutting himself with a knife, the Danish FA announced on Sunday.
Andreasen, who plays for Bundesliga side Hannover, sustained a deep cut to his left hand while trying to open a package, with the extent of the injury forcing the 32-year-old to undergo surgery.
“We all know that Leon has had lots of injury problems, which have forced him to miss tournament finals, and now he's the victim of an injury which has nothing to do with football. It's tough for him and a great shame for the team,” Denmark coach Morten Olsen said in a statement.
Denmark travel to Sweden for the first leg on Saturday before returning to Copenhagen for the second leg on November 17.