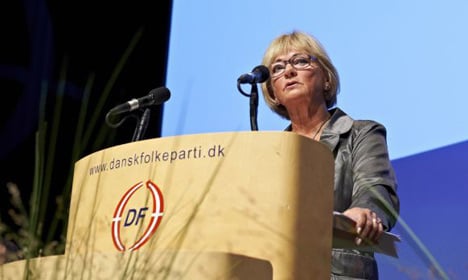 Pia Kjærsgaard called MPs' use of social media "reprehensible". Photo: Dansk Folkeparti
Pia Kjærsgaard, the Danish People’s Party icon who assumed the powerful position of speaker of parliament following June’s elections, says Danish MPs are too busy posting to Facebook and Twitter when they should be paying attention to what’s being said in Christiansborg.
“It is completely reprehensible that people were sitting there on [parliament’s] opening day and tweeting,” Kjærsgaard told BT.
“Respect for parliament’s lectern needs to come back. It is the Kingdom [of Denmark’s] most distinguished lectern. Everything said here is written down in minutes and saved for eternity […] it’s as if that has been forgotten,” she added.
She told the tabloid that she’d prefer to see the use of all social media banned during parliamentary sessions. Tweeting and using Facebook while others are speaking is a sign of “bad manners”, she said.
Kjærsgaard also said she wants to see parliament adopt new photography guidelines, telling BT that when politicians’ selfies are a sign of “a lack of respect”.
She singled out to photos from MPs Yildiz Akdogan (Social Democrats) and Johanne Schmidt-Nielsen (Red-Green Alliance) as particularly distasteful.
Schmidt-Nielsen’s photo shows her posing with the comedy duo Adam & Noah from the successful satire programme ‘Hvad sker der, danskere?’

Akdogan’s Facebook profile photo shows her sitting on the parliamentary lectern in a shot she said was inspired by the 100th anniversary of Danish women’s right to vote.
She completely rejected the idea that the photo is disrespectful.

“This picture is a call for humility and I’m sorry if it was perceived as disrespectful. That was not at all how it was meant. For me, my election to parliament was the realization of the Danish dream. I am the daughter of a grocer and the only woman in parliament with a different ethnic background,” she told BT.
Kjærsgaard said she wants politicians to be more mindful and respectful of parliament’s traditions and a reader poll on BT’s website may show that she’s on to something .
Nearly 79 percent of respondents said that MPs are too busy with their phones while in parliament and 69 percent said smartphones and tablets should be banned while parliament is in session.