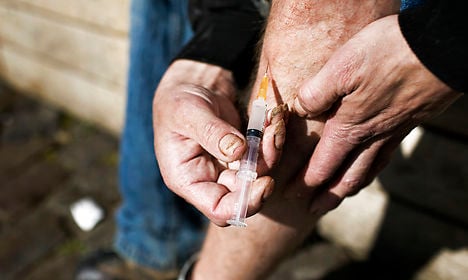 There were 50 more drug deaths in 2014 than in the two preceding years. Photo: Mikkel Møller Jørgensen/Scanpix
Figures from the Danish National Police (Rigspolitiet) and the Danish Health and Medicines Authority (Sundhedsstyrelsen) revealed on Monday that 263 people died from drug-related causes in 2014.
That number is 50 higher than in both of the two preceding years and sets a new single-year record.
The trend is worst in the Region of Southern Denmark, where drug deaths have doubled.
Gitte Frederiksen, a spokeswoman for Vejle Municipality, said the increase is worrying.
“We can see that more people, including many youths, have a growing addiction. It is of course completely unacceptable that so many are dying,” she told news agency Ritzau.
In Vejle alone, where the population is under 55,000, there were 13 drug deaths.
Frederiksen said the municipality is considering establishing a legal injection room, something that has proven successful in Denmark’s larger cities.
See also: Denmark's injection rooms save 300 lives More cities are now considering legal injection rooms, like this one in Vesterbro. Photo: Niels Ahlmann Olesen
The country’s five injection rooms – located in Copenhagen, Odense and Aarhus – allow drug users to get their fix in controlled environments and under the watchful eye of healthcare professionals.
A report released by the Health Ministry earlier this year showed that the injection rooms saved 301 lives. In those instances, the drug user overdosed but was saved by the trained personnel who supervise the injections.
According to the figures, neither Copenhagen nor Aarhus experienced an increase in drug deaths, something Health Minister Sophie Løhde said can be at least partially attributed to the legal injection rooms.
“They have been given a safe place to take their own drugs under hygienic conditions,” she said in a comment to Ritzau.
Løhde added, however, that with eight of ten drug deaths occurring in private homes there is a clear limit to the injections rooms’ effect.
“Many drug abusers die in their own homes or in those of their friends or acquaintances. Solely based on that, one cannot assume that there will be a significant fall in drug-related deaths if more municipalities choose to establish injection rooms,” she said.
Løhde said that earlier prevention efforts and better addiction treatment can help bring down the deaths.
The City of Copenhagen has also been experimenting with so-called overdose packets for addicts. The packets include revival instruments and the drug Naloxone, which addicts can give each other until an ambulance arrives.
According to Ritzau, Denmark has one of the highest rates of drug deaths in Europe.