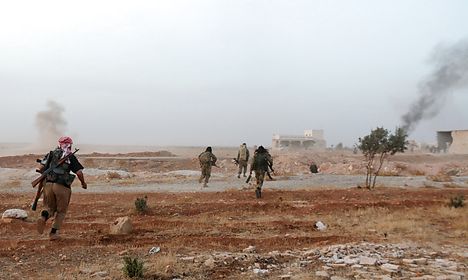 The government's plan calls for defining foreign
As promised, the Danish government has announced a series of law proposals that will introduce tougher punishments for Danes who join terror groups to fight abroad.
Justice Minister Søren Pind formally introduced plans to treat Danes who engage in armed conflict abroad as traitors, allowing for punishments that could include lifetime sentences.
Under the plan, so-called foreign fighters could be punished with a life sentence for joining foreign terror groups while those who recruit or encourage others to join the groups would face up to 16 years behind bars.
Currently, Danish law allows for a maximum 16-year sentence for offences related to treason.
“People who live in this country must be loyal to Denmark. We mustn't accept that militant, extremist groups succeed in recruiting foreign fighters from Denmark,” Pind said in a statement.
“When people neglect their loyalty and choose to fight alongside extremists they need to be aware that they will be closely watched and it will have serious consequences when they return,” he added.
See also: Danish jihadists pose 'significant' threat
The Danish Security and Intelligence Service (PET) said last week that no fewer than 125 people have left Denmark to fight in Syria or Iraq since the summer of 2012. Around half of those who have fought abroad have since returned to Denmark, and PET said they pose a significant terror threat to Denmark.
Per capita, Denmark is the second largest European source after Belgium of jihadist fighters going to the Middle East.
Pind’s plan also calls for PET to be given additional access to the EU Passenger Name Record (PNR) database so the service can more easily collect information on people travelling to and from Denmark.