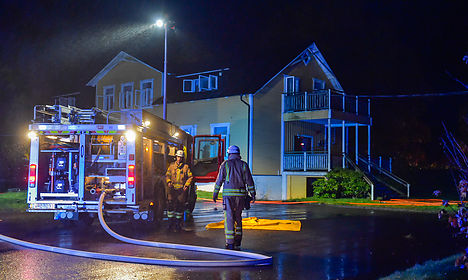 After at least a dozen fires, Sweden will now keep asylum housing locations secret. Photo: Jan Emanuelsson/Topnews.se /Scanpix
Danish People’s Party (DF) MP Dorthe Ullemose wrote a letter to the editor of local newspaper Fyns Amts Avis in which she said that the series of apparent arson attacks on refugee housing in Sweden is “to be expected”.
“A quickly growing number of residents in a Sweden on the brink of collapse feel completely powerless over politician’s irresponsible actions and have chosen to burn buildings that were to house migrants. What did the politicians expect?” Ullemose wrote.
As word of her letter began to spread, Ullemose told Politiko that she wasn’t condoning the fires but again said that they were understandable.
“At a certain point, people have had enough. Particularly if they aren’t listened to. And then they carry out actions that they don’t really want to do. That’s what we are seeing with the fires in Sweden right now. People become desperate. That’s what one should expect when you don’t listen,” she said.
In Sweden, there have been at least a dozen fires at buildings earmarked for asylum accommodation since the summer. In response, the Swedish national Migration Agency said on Wednesday that it would keep the locations of future similar facilities secret out of fear of further attacks. On Wednesday night, yet another fire broke out at a Swedish asylum facility, this time at a refugee arrival centre in Malmö just across the Øresund Bridge from Denmark.
Ullemose’s comments were criticized by several politicians, including a spokesman for the ruling Ventre party. DF spokesman Peter Skaarup said he didn’t disagree with Ullemose’s point but that she could have formulated it better.
“The opinion piece was written in a way so that political opponents could shoot her in the foot and say that she sympathized with the fires. The Danish People’s Party does not in any way think it is understandable or to be expected that asylum centres are being torched in Sweden,” Skaarup told Politiko.
“But with that said, Sweden is in a situation in which the influx of refugees is out of control and where a party that represents a large portion of the population is completely shut out of political deals,” he added in reference to the Sweden Democrats.