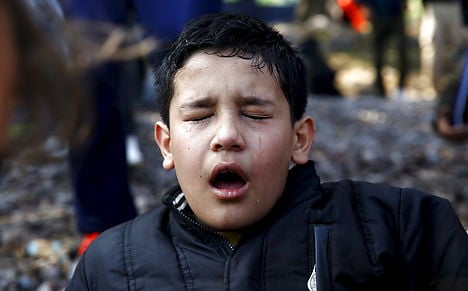 An Afghan migrant boy cries soon after arriving on an overcrowded raft at a beach on the Greek island of Lesbos last week. A record number of unaccompanied Afghan minors are ending up in Denmark. Phot
A quarterly overview of immigration figures released by the Danish Immigration Service (Udlændingestyrelsen – DIS) on Tuesday shows that 9,743 people sought asylum in Denmark in the first nine months of 2015.
By comparison, neighbouring Sweden received 9,243 asylum seekers in just the past seven days.
Nearly 1,000 more asylum seekers came to Denmark in September than in August, but the 2,761 asylum seekers who arrived in September 2015 were significantly fewer than the 3,147 who came in September 2014.
The DIS figures also show that the number of unaccompanied minors seeking asylum in Denmark more than doubled between August and September, going from 162 to 335. The 943 unaccompanied minors who have arrived in the first three quarters of 2015 is well above the 818 who came in all of 2014 and represent an all-time high.
Although Syrians are by far the largest group seeking asylum in Denmark, the number of unaccompanied Afghan children increased dramatically. The 125 Afghan children who arrived last month was a more than threefold increase over August and more than twice as many who came in all of 2014.
The head of asylum affairs at the Danish Red Cross said that its system is struggling to deal with the minors.
“Right now it is about finding space, because our children’s centres are full,” Anne La Cour told Politiken.
While the number of child asylum seekers is at a record high in Denmark, it comes nowhere near the level in Sweden. The Swedish Migration Board (Migrationsverket) said last week that it expects 30,000 children and young adults to arrive in Sweden without a parent or other older relative.