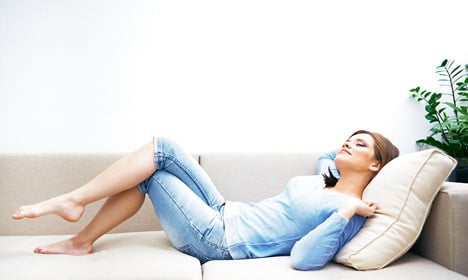 Photo: Yuriy Shevtsov/Scanpix
If it were up to Ane Marie Thulstrup, the head consultant at Aarhus University Hospital’s Department of Occupational Medicine, working women would be given a simple prescription for de-stressing: an immediate flop on the sofa when coming home from work.
Thulstrup is behind a new urine analysis that found significant differences in the stress levels of men and women when they get off work.
“The stress level falls very quickly for men at closing time while for women it first falls between 10 and 11pm,” Thulstrup told public broadcaster DR.
To bring down those stress levels earlier, women should get in the habit of coming home and immediately lying down on the floor or sofa before launching in to household chores.
“We’ve heard about prescribed exercise and diet but I tend to say that we should prescribe the sofa,” Thulstrup said.
Thulstrup said that women tend to always be doing two things at once, thinking about work while they are at home and worrying about what needs to be done at home while they’re still on the job.
The problem is particularly prevalent in Denmark, where 70 percent of adult women are active in the workforce, well over the EU average of 59 percent. Danish women also carry the brunt of the burden at home as well, performing an average of 243 minutes of household work compared to just 186 for Danish men.
Aarhus University Hospital’s Department of Occupational Medicine sees 80 percent more woman for stress issues than men and women also take more sick days for stress reasons.
Thulstrup said that women need to force themselves into the habit of relaxing when they get home.
“One can practise by relaxing for just ten minutes and letting the kids crawl over you if it comes to that,” she told DR.