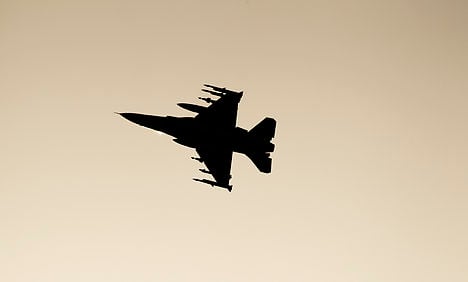 Photo Christian Als/Scanpix
The Danish Defence Command said in a press release that an F-16 fighter jet went down into the North Sea off the coast of the western island of Rømø at around 2.30pm on Tuesday.
The pilot of the jet had to use his ejector seat and was later rescued by a Danish Royal Air Force helicopter. The pilot was not seriously injured in the incident, which Defence Command said was due to faulty landing gear.
“The most important thing for me is that the pilot is in good health. Our pilots are trained for this, but it is an intense experience and he will get all of the support he needs,” Anders Rex, the head of the Fighter Wing Skrydstrup  airbase in southwestern Denmark, said.
The Danish military is currently in the process of purchasing new fighter jets to replace its fleet of ageing F-16s, which date back to 1980. The new jets will represent one of Denmark’s biggest public purchases of all time. Originally expected in July, a final decision on the type of jet is now due by the end of November.
Rex said he did not think the F-16 fleet's age had anything to do with the incident.
“I don't see any connection. The aircraft are old, but we have seen this error before,” he told broadcaster TV 2.