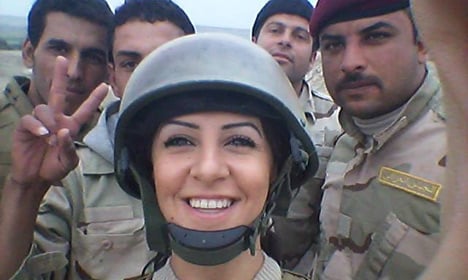 In a photo posted to Facebook, Palani poses with other Peshmerga fighters.
Joanna Palani stepped forward in the Danish national press last year to say that she had left Denmark to fight against Isis in Iraq.
“I would rather die in battle than on the run,” the 22-year-old told Politiken newspaper.
But over the weekend, while back in Denmark on what she thought would be a temporary break from fighting in Iraq, Palani wrote on Facebook that she has had her passport confiscated.
“The police and PET [the Danish Security and Intelligence Service, ed.] have taken my passport and forbidden me from leaving Denmark. That puts me in the dilemma that I cannot continue my service down there as a soldier,” Palani, who came to Denmark as a refugee at age three, wrote.
In addition to having her passport revoked, Palani also faces a one-year travel ban which took effect on September 29th.
Palani has fought alongside the Kurdish Peshmerga forces, which are supported by Western nations including Denmark. She wrote on Facebook that she can’t understand why Danish officials are punishing her under new so-called ‘foreign fighter’ rules that are meant to make it easier for authorities to stop Danes from fighting alongside terror groups.
“How can I pose a threat to Denmark and other countries by being a soldier in an official army that Denmark trains and supports directly in the fight against the Islamic State?” she wrote.
Palani is being punished under the same law, passed in March, that has led to passport confiscations and travel bans of at least five other Danes, all of whom were suspected of fighting alongside Isis. In September, the law was also used for the first time to revoke the residence permit of a suspected foreign fighter.
Before leaving Denmark, Palani acknowledged that she was running a legal risk.
“I fear that if I go down there, if someone goes down there, and comes back – after fighting for the rights of the Kurds and for Kobane – I fear that the Danish authorities will come after them and it will have major consequences,” she said in a video interview with Politiken.
Still, she said that she felt the need to join the Peshmerga forces.
“I as an individual can’t save the world – I’m not Superman. But I can contribute and if I know that something is very wrong and I know that I can make a small difference even for just one person, then I will do it,” she added.
Justice Minister Søren Pind told Berlingske over the weekend that Denmark’s foreign fighter law is “very clear” but suggested that Palani could challenge the decision in court, which her lawyer has already announced plans to do.