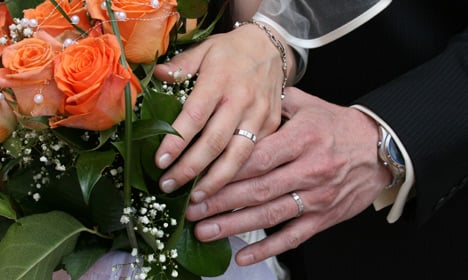 Foreigners who marry Danes would face two unequal sets of rules under the plan. Photo: Colourbox
A proposal from the government would essentially split Danes’ foreign spouses and other family members into two groups: those who are “suitable for integration” and those who are only “potentially suitable for integration”. The former will have an easier path into Denmark while the latter will have more difficulty.
“From now on, foreigners with poor preconditions for being integrated will be met with significantly tougher requirements for family reunification. At the same time, there will be fewer requirements for those foreigners who can immediately contribute to society,” a press release from the Ministry for Immigration, Integration and Housing stated.
Who falls in to which group will be determined on the basis of four criteria: work experience, education level, language skills and “integration-related conditions”. Those who meet three of the four requirements will be considered “suitable for integration” and face easier rules while those who do not will see new restrictions.
See also: Denmark preparing harder residency rules
In order for the “potentially suitable for integration” category to be granted family reunification in Denmark, they will have to document that they can speak one of the Scandinavian languages, English or German. They will also face a tougher definition of their connection to Denmark, needing to show that their relationship to Denmark is “significantly greater” than their connection to another country, whereas today the requirement calls for just a “greater” connection.
People in this category will also have to have demonstrated active citizenship through volunteer work or by passing a test and their residency requirement will be upped to ten years in Denmark instead of the current seven.
Those who are deemed “suitable for integration” from the start will not have to document their language skills or be subjected to the active citizenship or connection requirements.
Both groups will be ineligible for family reunification if they live in an official ghetto area and employment requirements will also be sharpened for both categories.
See also: Denmark approves tougher citizenship rules
Integration Minister Inger Støjberg, who last year caused a stir with her suggestion to make immigration rules that would distinguish “between a Christian American or Swede and a Muslim Somali or Pakistani”, said the new proposal would improve integration.
“Those who are willing and able to contribute to society should be welcome. At the same time, we will increase our demands on those who don’t have the preconditions to become integrated. That is only right and fair, because people who voluntarily come to Denmark should naturally contribute to society,” she said.
Political negotiations of the new requirements were scheduled to begin on Friday. Parliament’s two largest parties, the anti-immigration Danish People’s Party and the Social Democrats, have expressed support for the plan meaning that it is likely to be passed into law.
The family reunification plan comes after the government has proposed changes to permanent residency requirements, made it harder to become a Danish citizen and drastically cut the welfare benefits granted to refugees.