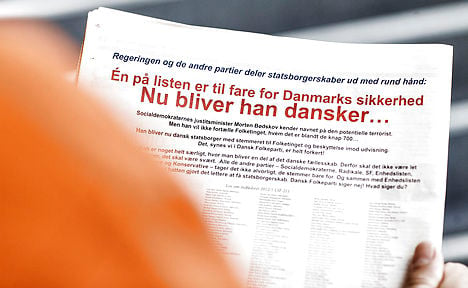 The advertisement caused a major fuss in 2013. Photo: Jeppe Bjørn Vejlø/Scanpix
A highly controversial 2013 newspaper advertisement in which DF posted the names of all 685 people due to receive Danish citizenship and insinuated that a terrorist was among the list has come back to haunt the party.
DF ran the full-page advertisement, which listed every single name on the upcoming citizenship bill under the headline “One person on the list is a danger to Denmark’s security. Now he will become a Dane”.
The party placed the ad after the Danish Security and Intelligence Service (PET) said that one of the people due to receive citizenship had been monitored for “worrying and suspicious” behaviour.
Fifteen of the innocent new citizens who had their names published filed a libel suit against the anti-immigration party and on Friday the Copenhagen City Court ruled in their favour and ordered DF to pay the 15 plaintiffs 10,000 kroner each, as well as 10,000 kroner to cover the case’s legal fees.
DF has also been ordered to strip the advertisement from its website.
The lawyer representing the new Danes cheered the court’s decision.
“We are very satisfied with the fact that the Danish People’s Party has been convicted for subjecting my clients to these remarks. I am happy on my clients’ behalf but also because the court has sent a clear signal to society that this is not something we will accept,” Poul Hauch Fenger told TV2.
DF spokesman Søren Espersen called the decision “unfair” and said that the party woud appeal to the High Court.
“We are very surprised about the decision. We think it is an attack on free speech,” he told TV2.
Under the Danish constitution, foreigners can only obtain citizenship by law. Twice each year – in April and October – parliament is presented a bill with the names of all individuals who have qualified for citizenship, which it typically passes as a formality.