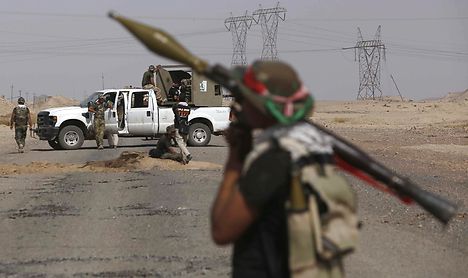 An Iraqi Shiite fighting alongside Iraqi government forces prepares to take on the Islamic State. Most Danes who have gone to the area fight for Isis. Photo: Mohammed Sawaf/AFP/Scanpix
In its latest terror risk assessment, PET said that no fewer than 125 people have left Denmark to fight in Syria or Iraq since the summer of 2012.
The agency’s Center for Terror Analysis (CTA) cautioned that “the number can be higher”.
Around one half of those who have fought abroad have since returned to Denmark, while at least 27 are known to have died in battle.
The majority of those who have left Denmark to fight are young Sunni Muslim men but CTA said that up to ten percent are women.
“The conflict in Syria/Iraq continues to attract people from Denmark but the number is falling. On the other hand, those who have travelled to war zones are remaining there for longer periods, are younger and are overwhelmingly joining the Islamic State,” Søren Jensen, the head of CTA, said in a statement.
“PET continues to believe that the conflict in Syria/Iraq represents the most significant factor in the threat situation in Denmark,” Jensen added.
The agency said that it is particularly worried about those who have returned to Denmark after joining terror groups abroad.
“CTA estimates that among those who have returned from Syria/Iraq, there are individuals who can pose a terror threat. Those who have returned from a conflict zone who wish to carry out terror can act on their own initiative or at the request or instruction from groups or individuals in Syria/Iraq with a global militant Islamist ideology,” the report read.
Although the flow of Danish jihadists to Syria has slowed, Denmark is still thought to be behind only Belgium as the European country that produces the most foreign fighters per capita.
The justice minister said earlier this month that the government is preparing legislation that will allow for treating foreign fighters as traitors.
The risk report from PET’s Center for Terror Analysis can be read here (in Danish).