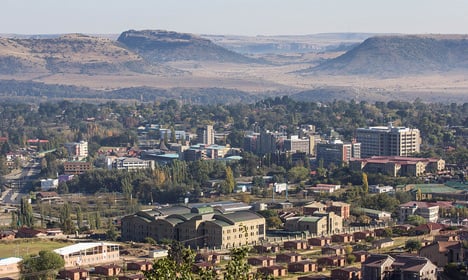 The woman was killed in Meseru, the capital of her native Lesotho. Photo: OER Africa/Flickr
Just as South African police said that they had made a breakthrough in their investigation of Peter Frederiksen, a Danish man suspected to be behind a string of gruesome mutilations, the primary witness in the case was killed while waiting for a taxi.
The South African news site Netwerk24 reported that 28-year-old Anna Matsiliso Molise was shot near her home in the Lesotho capital of Maseru on Tuesday. Police have ruled out a robbery as nothing was stolen.
“She died on Wednesday in Lesotho,” South African police spokesman Brigadier Hangwani Mulaudzi told AFP.  “We did offer her protection, but she refused. She was a key witness, but we still have other witnesses who will come forward.”
The South African news site News24 reported that Molise was shot four times.
“It is suspected to be a hit,” spokesperson Brigadier Hangwani Mulaudzi told the site.
Molise was in the process of divorcing Frederiksen and was the one who initially put police on his trail.
Molise was also reportedly a victim of Frederiksen’s genital mutilation and told police in mid-September that she had been drugged and attacked while unable to defend herself.
Investigators then found 21 pieces of genitalia in the Dane’s freezer along with surgical tools, anaesthetic and a trove of photos documenting the macabre acts.
Earlier this week, South African police hailed a “preliminary breakthrough” in the investigation, saying that officials had identified some of his victims, which include a seven-year-old girl. Investigators also belive that some of the genitals may come from Danish women.
Most of the victims however are believed to have come from Lesotho, a small mountainous kingdom surrounded by South Africa.
Frederiksen previously participated in a radio documentary for Danish public broadcaster DR in which he openly detailed performing genital mutilation on his African wife and her friends.
He reportedly fled from Denmark to South Africa to avoid weapons charges and opened a gun shop in the city of Bloemfontein.
Frederiksen has been held in police custody for nearly a month and will appear before a judge again on November 4th.
No arrests have been made in Molise's death.