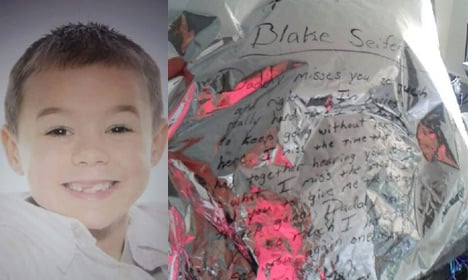 A message to Blake Seifers (left) made it from Illinois to Denmark. Photos: Justice For Blake Kenneth Seifers/Facebook
Blake Kenneth Seifers was just seven years old when he was struck and killed by a car while riding his bike in the town of Pontiac, Illinois in June 2014, local TV station KFVS reported.
The boy’s family periodically pays tribute to their lost loved one by releasing helium balloons with hand-written messages to Blake on special occasions or when they feel overcome by grief and loss.
In September, they released balloons on Blake's birthday and this week a Danish woman discovered one in her back yard.
“This might sound very strange [be]cause we live in Denmark, but my daughter found this balloon yesterday in our garden. [It] has the name Blake Seifers on top and it's from a dad who has lost a son. The message is very [beautiful] and heartbreaking. I was really moved and I think it's amazing if the balloon came from you,” Karina Rye Sørensen wrote in a Tuesday post to a Blake Seifers memorial page on Facebook.

So totally cool!Karina Rye SørensenOct 21st, 9:19amHello. I think my first message dissapeared so I try again. This…

Along with Sørensen’s post was a photo of the balloon that had travelled halfway around the world.
“Daddy misses you so much and right now I’m having a really hard time,” the message reads in part.
The boy’s aunt, Jack Brockett-Dent, told KFVS that the family was moved by Sørensen’s post.
The Seifers family has also set up a Facebook page to hold the driver in the fatal accident legally accountable.

COVID-19
EU approves use of Pfizer-BioNTech vaccine in children 12 and over in Europe
Url copied to clipboard!