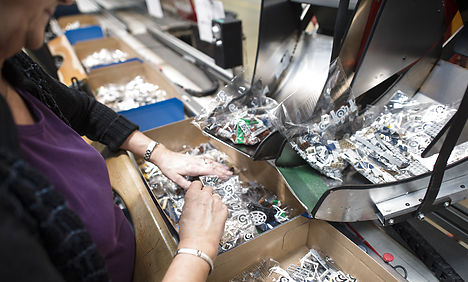 Lego will increase production in Denmark, Mexico and Hungary to meet demand. Photo: Claus Fisker/Scanpix
Toy maker Lego on Wednesday warned it may be unable to deliver all European orders in the run-up to Christmas due to strong demand, meaning some shoppers could face empty shelves.
“When we get new orders we will face a challenge in some markets in Europe to ship those orders to the stores,” spokesman Roar Rude Trangbæk told news agency AFP.
“This comes on top of a first half of 2015 where we really outperformed our expectations for how sales would develop,” he said.
All orders already been placed by retailers will be delivered, he added.
The privately-held group declined to say which product ranges could be affected or how much of its annual revenue comes from the Christmas shopping season.
Around 60 percent Lego's annual consumer sales typically are yet to be made at this time of the year, Trangbæk said.
The group plans to meet rising demand by investing “significantly in factories in Mexico, Hungary and Denmark” until 2022, it said.
“We anticipate welcoming thousands of new employees to the group as we continue to expand our global presence,” chief financial officer John Goodwin said in a statement.
Figures released in September showed that first-half revenue increased 23 percent to 14.1 billion kroner (€1.89 billion, $2.15 billion), putting the Danish company ahead of its US-based rivals Mattel — maker of Barbie — and Hasbro, whose products include the Transformers toy line.
Net profit grew 31 percent to 3.55 billion kroner, making it more profitable than its two competitors.
The Lego City, Technic and Starwars lines were among the most popular in the period, while new launches such as Jurassic World and the girl-focused Lego Elves “were received very positively,” the company said.