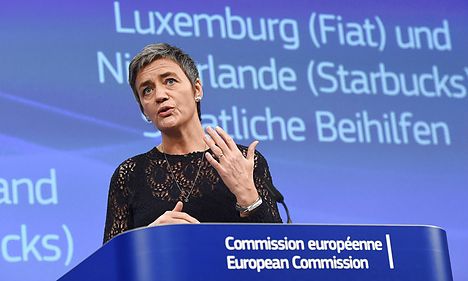 The EU's commissioner for competition Margrethe Vestager ordered Starbucks and Fiat to each repay up to 30 million euros in back taxes. Photo: Emmanuel Dunand/AFP/Scanpix
The European Commission said that Fiat and Starbucks will be hit with large back taxes bills after the companies were granted selective tax advantages in Luxembourg and the Netherlands.
The ruling follows an investigation which got underway in June last year as part of a series of probes against top companies announced in the wake of the LuxLeaks scandal, which revealed that some of the world’s biggest companies had negotiated lower tax rates in secret pacts with Luxembourg.
See also: EU commissioner to use LuxLeaks docs
“Tax rulings that artificially reduce a company's tax burden are not in line with EU state aid rules,” Commissioner Margrethe Vestager, in charge of competition policy, said in a statement.
“They are illegal. I hope that, with today's decisions, this message will be heard by member state governments and companies alike. All companies, big or small, multinational or not, should pay their fair share of tax,” Vestager added.

Vestager has been steadily making a name for herself as EU’s hard-nosed antitrust chief, having already taken on Google and Russian oil giant Gazprom. The Dane assumed her influential position last October after serving as Denmark’s economy minister under PM Helle Thorning-Schmidt.
See also: Vestager wows at EU Commission hearing
In her latest action, Vestager and the EU Commission ordered Luxembourg and the Netherlands to collect €20-€30 million in unpaid taxes from Fiat Finance and Trade and Starbucks, respectively, in order to remove the unfair competitive advantage they have enjoyed and to restore equal treatment with other companies in similar situations.
It has been left up to the member states’ tax authorities to establish the exact amount.