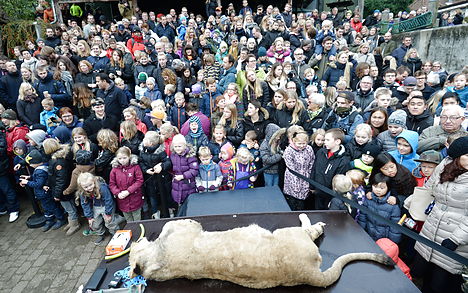 The dissection drew a large crowd of curious Danes. Photo: Claus Fisker/Scanpix
The latest episode of HBO’s ‘Last Week Tonight’ took aim at Denmark’s penchant for public dissections.
Host John Oliver recapped Denmark’s recent zoo controversies, beginning with the Copenhagen Zoo’s killing and dissection of the giraffe Marius that caused an international outrage in February 2014. Parts of the giraffe were then fed to the zoo’s lions, four of whom were themselves later culled. Oliver joked that if the trend continued, there might not be too many animals left.
“It seems pretty soon the Copenhagen Zoo will be one really fat meerkat sitting atop a pile of bones,” Oliver said.
See also: Despite outrage, Danish zoo dissects lion for kids
The British comedian then turn his attention to last week’s dissection of a lion at Odense Zoo. The zoo cut open the lion, which had been culled nine months earlier and since stored in a freezer, in front of a crowd of hundreds of children.
Oliver, however, was rather manipulative with his choice of photos from the event. He showed a photo of children holding their noses, saying “that is how much they enjoyed it.” In reality, several of the children who attended the dissection told reporters that they found the dissection fascinating.
See also: Lion dissection is 'incredibly Danish'
The comedian concluded that “if Danish zoos aren’t going to stop this behaviour, they may as well use it as a selling point,” ending the segment with a fictional commercial for a Danish zoo.
The zoo’s tagline was “We are nature’s grim handmaiden shuffling off the mortal coil of beasts as we dance in doom’s firelight.”

After their recent dissection of a lion, we created a new slogan for Denmark's zoos: pic.twitter.com/gl5z3XOceA

‘Last Week Tonight’ can be seen every Sunday on HBO and HBO Nordic.