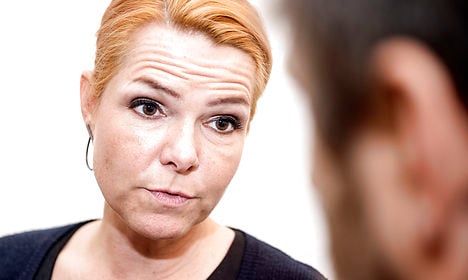 Inger Støjberg is working on her next round of immigration changes. Photo: Bax Lindhardt/ Scanpix
After already implementing tougher rules for refugees and would-be citizens, the Danish government is now planning to tighten the restrictions for foreigners who want to obtain permanent residence.
The changes being championed by the Venstre government appear to largely mirror the new citizenship requirements that were approved by parliament earlier this month.
See also: Denmark approves tougher citizenship rules
According to TV2, the government will push to change the Danish language demands by requiring foreigners to pass the Danish 2 exam rather than the current Danish 1 exam. Foreigners with criminal records will also face a 50 percent longer quarantine for residency than they do now.
Self-reliance and employment requirements will also be sharpened. Whereas today a foreigner needs to have been employed for three of the past five years, the new proposed rules would change that to 2.5 out of the past three years. On top of that, applicants for permanent residency will have to meet at least two of the following four supplementary requirements: ‘active citizenship’ or the passing of a test on societal values and norms; a regular full-time job for four of the past 4.5 years, an annual average income of 300,000 kroner for two years or successfully passing the Danish 3 language exam.
See also: Denmark eyes series of immigration law changes
On the other hand, foreigners will now be able to apply for permanent residency after four years rather than the current five years.
Integration Minister Inger Støjberg was scheduled to begin negotiations on the proposed changes on Tuesday afternoon. TV2 reported that the negotiations will also include changes to family reunification rules. In its law catalogue released earlier this month, the government alluded to changes in that area that would include tougher restrictions for “foreigners who have poorer preconditions for becoming integrated into Danish society” and easier rules for “foreigners who are consider to be suitable for integration”.