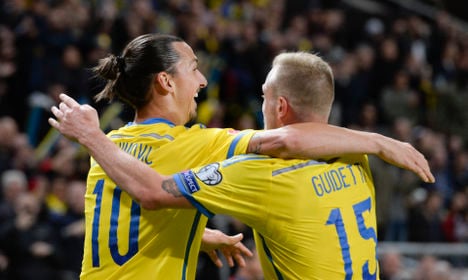 The old and the new. Veteran Zlatan Ibrahimovic and young star John Guidetti will likely play together against Denmark. Photo: Janerik Henriksson/TT

These matches will be the latest – and surely two of the most significant – of a very fierce sporting rivalry.

The team drawn first, in this case Sweden, will play at home first.

The matches between the two neighbouring countries have, since the first match in 1913, always attracted large crowds.

One of their biggest clashes was in the 1992 European Championships in Sweden when they met at the group stage. Sweden won 1-0 and went on to top the group, closely followed by Denmark.

However, Denmark, who only played at the championships thanks to Yugoslavia being ejected by a UN security council edict at the height of the Balkan crisis, went on to win the tournament, defeating Germany in the final.

Sweden reached the semi-finals that year, a performance which is still their best in the tournament.

The player, who is also the top scorer in the history of his French club side PSG, has said he does not want to miss the European Championships, telling global media this week “it's really unimaginable to me that this tournament takes place without me”.

“We have not been able to get there directly so we will take another route. Whoever we face in the playoffs, it will be difficult.”

“In these games, it is all or nothing and each team gives 200 percent but I am sure we will qualify.”

Sweden and Denmark have played each other 104 times. Sweden have won on 45 occasions, Denmark 40 times, and there have been 19 draws.