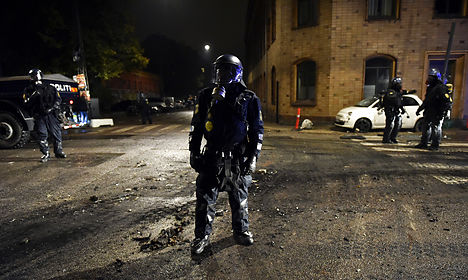 A police officer wearing a gas mask clears the area. Photo: Jens Nørgaard Larsen/Scanpix
Four people were arrested after a demonstration in Copenhagen's Christianshavn district turned into a clash with police officers.
The demonstration was organized by the group Reclaim the Streets, which was behind a similarly violent demo in Nørrebro in August.
On Friday, the group was met by a massive police presence near the alternative enclave of Christiania. Copenhagen Police reported that its officers used tear gas after being attacked with Molotov cocktails and bricks. According to police, demonstrators also set fire to barricades and a parked vehicle.
“In connection with our action, police were attacked by a large group of masked individuals and tear gas was used in connection with our efforts in the area,” a police press release stated.
Two of the arrests were for violence against the police, one for attempted violence against police and one for public disturbance.
The disturbance began shortly before 10pm and police left the area again around an hour later.
Videos of the clash can be seen here.