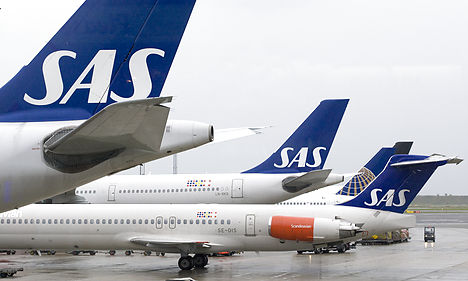 A SAS spokeswoman said the dropped routes were no longer profitable. Photo: Steffen Ortmann/Scanpix
SAS will drop its year-round flights to both Moscow and Tel Aviv and will also discontine its seasonal flights to Ankara.
Airline spokeswoman Trine Kromann-Mikkelsen told air industry website check-in.dk that its Moscow route has struggled as Russia deals with a ruble crisis and Western sanctions over its aggressions in Ukraine.
“We have unfortunately had weak growth in Moscow which means that we can’t maintain it. We will keep Saint Petersborg from Copenhagen and we still have departures to Moscow from Stockholm,” she said.
See also: Copenhagen travellers to get eleven new routes
The airline will also drop Tev Aviv, after resuming flights to the Israeli city in 2012 after a ten-year absence.
“Tel Aviv is an expensive route to operate in stiff competition and we don’t have a sufficient profitability to keep it. We can also see that political instability is affecting the route,” Kromann-Mikkelsen told check-in.dk.
SAS and rival carrier Norwegian both had to temporarily ground all fights from Copenhagen to Tel Aviv last summer after a rocket landed near the Ben Gurion International Airport.
In addition to the Copenhagen closures, SAS will also drop six seasonal routes out of Stockholm, Gothenburg and Oslo.
But the news from SAS wasn’t all bad. The airline said that in addition to the new direct flights to Boston, Krakow, Reykjavik and Vienna announced earlier this month, it will also add a summer route from Copenhagen to Faro in Portugal as well as one from Aarhus to Palma de Mallorca.