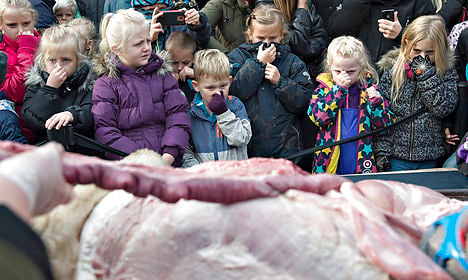 "Dead animals smell like dead animals." Photo: Claus Fisker/Scanpix
A Danish zoo on Thursday dissected a lion in front of a group of children, in an educational event condemned as a “macabre spectacle” by animal rights groups but given a thumbs-up by many Danes.
The nine-month-old lion was one of three that Odense Zoo in central Denmark put down in February after failing to another home for them, and had since been kept in a freezer.
Between 300 and 400 children and adults gathered around Odense zoo guide Rasmus Kolind as he began the dissection by cutting off the lion's tongue.
Click the photo for a full gallery from the dissection (some readers might find them disturbing). Story continues below. Photo: Claus Fisker/Scanpix
Some of them, standing only centimetres away, held their noses and frowned as the dead animal was skinned and the stench of the cadaver began to spread.
“Wouldn't it be stranger if I were standing here cutting up an animal that smelled like flowers or something else?” Kolind told the crowd.
“Dead animals smell like dead animals. There's not a lot to say about that,” he said.
Some of the children were as young as four.
“I don't want to see that,” one boy said, while a girl interviewed by public broadcaster DR described the event as “fun to see but also a bit disgusting.”
Zoo guide Lotte Tranberg explained why the healthy young lion had to be put down.
“If we had allowed it to stay it could have mated, that is to say have cubs, with its own sisters and its own mother. And then you have what is called inbreeding,” she told the crowd.
See also: Lion dissection is 'incredibly Danish'
Tranberg and Kolind later tried to recreate a lion's roar by blowing into a tube they had inserted into the dead animal's neck.
In a scene that might have shocked parents in other countries, Kolind jokingly asked: “Is there anyone who would like an eye?” before chopping off the lion's head, holding it up and then proceeding to skin it.
International criticism
Public dissections are a regular occurrence at Danish zoos, where they are seen as a way of teaching children about nature.
Copenhagen Zoo prompted a storm of criticism in February last year, and its scientific director received death threats, for putting down a healthy giraffe and cutting it up in public.
Earlier this year, Odense zoo dissected a camel, pony and  tapir (a creature that looks like a pig with a trunk), without sparking controversy, but Thursday's dissection was a different matter.
More than 135,000 people, most of them living outside Denmark, signed an online petition condemning the zoo's display.
“I am now embarrassed to admit that my great grandmother was 100 percent Danish after hearing of your plans to slaughter animals,” Laura O'Hara from the US town of Fairfax wrote on the zoo's Facebook page.
Most comments from Danish users however defended the event, which took place during the autumn school break, as having educational value.
“Valid choice”
A spokeswoman for the Humane Society International in Europe, Wendy Higgins, accused the zoo of “making a macabre spectacle out of a much deeper tragedy.”
The group said it highlighted widespread over-breeding of lions and “thousands of other animals” in zoos.
Photo gallery of the dissection here
The Danish Animal Welfare Society, by contrast, dismissed the reaction as disproportionate.
“Millions of chickens live miserable lives. Nobody reacts,” the group wrote on Twitter.
The European Association of Zoos and Aquaria (EAZA) also released a statement in support of Odense Zoo, saying that “the dissection of an animal carcass for educational purposes is a valid choice”.
In Denmark, where farming is an important part of the economy and children have been known to visit slaughterhouses on school tours, many people have been taken aback by the outrage over the dissections.
Copenhagen Zoo's scientific director Bengt Holst has lamented the “Disney story” shaping many people's view of zoo animals.