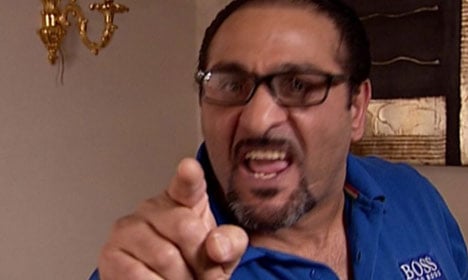 Gimi Levakovic, the self-described 'Boss' of Denmark's criminal underworld. Photo: TV2
Gimi Levakovic, known in Denmark as ‘the Gypsy boss’ (Sigøjnerbossen), was convicted on charges of having a loading pistol and making death threats by a Næstved court in August and sentenced to 15 months in prison followed by expulsion from Denmark. Earlier this month, the Eastern High Court agreed with the guilty verdict but reversed the expulsion order, leading to outrage on social media and a vow from Justice Minister Søren Pind that he would encourage prosecutors to take the case to the Supreme Court.
On Wednesday, Pind got his wish. The public prosecutor’s office (Rigsadvokaten) wrote on Twitter that it will pursue Levakovic’s expulsion at the highest court.
“The case has fundamental importance: The High Court emphasized that the prosecution hadn’t previously wanted Levakovic expelled. Does that apply to all cases?” the office wrote.

The High Court overturned Levakovic’s deportation by saying that it would adversely affect his two small children, for whom he has sole custody. That reasoning didn’t set well with many Danes, who pointed to countless examples of the Danish state breaking up families through deportation in immigration cases.
See also: Teen expelled from Denmark killed by Taliban
Levakovic became nationally-known thanks to a TV2 documentary entitled ‘The Gypsy Boss and His Notorious Family’ (Sigøjnerbossen og hans berygtede familie). A Roma from Croatia, Levakovic is the head of what for many years has been called ‘Denmark’s most criminal family’ and is the self-declared ‘boss’ of the nation’s Romas.
According to TV2, the Levakovic family first arrived in Denmark in 1972 and most of the 45-member clan have never had jobs and have instead lived off a mix of welfare benefits and crime. Three members of the Levakovic family have previously been sent back to Croatia for their crimes, which include home robberies, violence and rape.
In the original Næstved court ruling, Judge Christian Ankerstjerne pointed to Levakovic’s “history with numerous incidents of violence”.
“We believe upon that background that there is a risk that he will continue his criminal activities,” Ankerstjerne added.