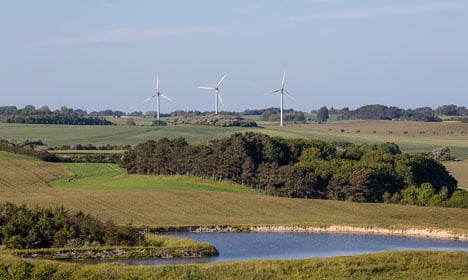 Samsø as been used as a global example for green solutions, but budget cuts threaten several projects. Photo: Birger Jensen/Samsø Energy Academy
One year ago, Samsø played host to a group of Americans looking to take inspiration from the island’s energy revolution and implement those ideas back home.
That trip became the subject of a lengthy New York Times feature on Samsø that put the 3,800-person island on the map for its expansive green energy efforts.

How the Danish island of Samso became a symbol for a greener future http://t.co/AVmC3ty5vE

Samsø was praised for obtaining green energy independence, meaning that it produces more power from renewable energy sources than it consumes and sells the excess into Denmark's national utility grid.
Fast forward to today and the island’s leaders fear that progress on the green energy front will be stopped in its tracks by the government’s proposed budget cuts, which will slash green funding for a number of projects and drop other planned initiatives. According to opposition party the Social Liberals (Radikale), the cuts will total nearly one billion kroner already in 2016. A plan to have the island's ferry run on liquid biogas is likely to be dropped. Photo: Erik Paasch Jensen/Samsø Energy Academy
Samsø is currently working on a plan to have the ferry that services the island run on liquid biogas, but for that to become a reality the island needs a cash injection from Denmark’s EUDP fund, established to help the nation reach its goal of being free of fossil fuels by 2050.
Under the Venstre government’s budget proposal, funding for the EUDP is to be slashed by 85 percent from 375 million kroner to just 52 million.
Without the EUDP funding, Samsø’s mayor said the island can’t move forward with the biogas plan as it requires investing in a large plant to cool the biogas in order to make it liquid.
Likewise, a plan to use excess energy created by Samsø’s windmills to power heat pumps that would warm the island’s homes in a carbon neutral manner is also likely to be scrapped if the government’s budget is approved.
A large nature preservation project on the island is also threatened.
“They are hitting us from all directions,” Samsø Mayor Marcel Meijer told Politiken on Thursday.
Popular academy to lose funding
The Samsø Energy Academy, which hosts international delegations looking to draw inspiration from the island’s innovations, is also due to have its 2.5 million kroner in annual funding axed under the government plan, something the academy’s director said will both stop projects on the island and make it much more difficult to share knowledge with others.
“We have received the financial support because we, among other things, host 5,000 – 6,000 guests every year from Denmark and abroad who want to see what we can do here on Samsø,” Søren Hermansen told Politiken. The Samsø Energy Academy, which spreads green ideas to the world, will lose its funding. Photo: Jørgen Bundegaard/Samsø Energy Academy
“Now we will have to decline international projects and turn down visits from all kinds of delegations from around the world,” he said, adding that the lack of international guests will also have a negative impact on the island’s hotels and restaurants.
Even the island’s vice mayor, himself a member of Venstre, slammed the cuts.
“It is real crap with the grant to the Energy Academy. The academy has done an amazing amount of work for a cleaner environment and to make Samsø known,” Carsten Bruun said.
Green initiatives 'very expensive'
The government has defended its green cuts by saying that environmental initiatives are too expensive and that even with less spending, Denmark will still be a world leader in the area.
In August, Climate Minister Lars Christian Lilleholt said that he would not push to meet the previous government’s goal of reducing carbon emissions by 40 percent in 2020 compared to 1990 levels. Instead, he said a 37 percent reduction would be sufficient.
“It will be very expensive for the Danish society to reach those last percentage points and will therefore impose extra costs on our business community. That is not what Denmark needs right now,” Lilleholt told Altinget at the time.
The government also recently announced that it would phase out tax breaks on electric cars, a move that Tesla has vowed to fight.
Critics have said that the government’s moves are particularly ill-timed, coming just months before December’s COP21 UN climate change conference in Paris, which is seen by many as one of the best chances to get the international community to commit to binding goals to curb climate change.
Opponents of the government’s savings plan argue that with Denmark’s widely-perceived role as a global leader in sustainable energy the cuts send a bad signal. The Danish Ecological Council went so far as to warn that the plan could “undermine” the Paris conference.