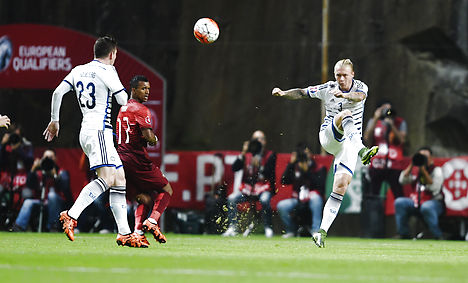 Denmark's Pierre Emile Højbjerg (left) and Simon Kjær (right) will find out their playoff foe on Sunday. Photo: Liselotte Sabroe/Scanpix 2015)
Sweden, along with Bosnia and Herzegovina, Ukraine and Hungary, was announced on Wednesday as one of the four seeded teams for the Euro 2016 playoffs when the draw is made on Sunday.
Under the seeding system, each of the four teams considered strongest by UEFA will play one of the four other teams left in the competition in two-legged play-offs, at home and away.
So, in a draw on Sunday, UEFA will reveal whether Sweden will take on Denmark, Norway, Ireland or Slovenia. If it’s not a Sweden-Denmark matchup, the Danes will face off against Ukraine, Bosnia or Hungary.
Denmark missed out on its chance to automatically qualify for Euro 2016 when it fell 0-1 to Portugal on Thursday and Albania easily topped Armenia on Sunday.
Football expert Morten Bruun said that Ukraine would likely pose the toughest challenge to the Danes.
“Ukraine has several players who play at the highest level and on the biggest European clubs, Bosnia and Herzegovina have a few, Sweden has one while Hungary doesn’t really have any,” he told Jyllands-Posten.
Denmark’s national coach Morten Olsen said his team would be ready regardless of its opponent.
“Whether it is Sweden, Ukraine or Bosnia, we have a history with all of them, both good and bad. But it’s important to stress that history is irrelevant here. Whoever we meet, it comes down to our performance on game day,” Olsen told Jyllands-Posten.
In all 24 teams will contest the Euro finals in France next summer – the most ever – with France assured of qualification as hosts.
The top two teams from the nine qualification groups have already scored their spots in the competition, as well as Turkey, who were the best-placed team finishing third.
That left four places to be decided in two leg playoffs, contested by the rest of the teams placing third.
The first legs will be held from November 12th – 14th with the return matches on November 15th – 17th.