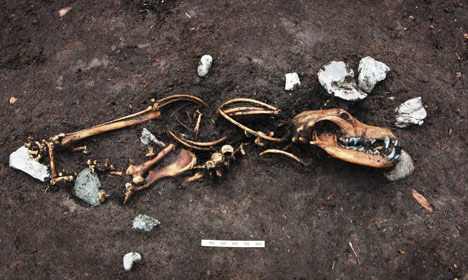 Eight dog skeletons were found next to three tethering stakes. Photo: Jacob Due/Moesgaard Museum
An archaeological dig at Skødstrup north of Aarhus has uncovered what Moesgaard Museum called a “remarkable” discovery that could shed new light on Iron Age customs.
An entire society dating back to around the time of the birth of Christ was found, including signs of both human and canine sacrifices. The museum’s archaeologists found a bog that was used to offer both humans and dogs as sacrifices for the gods.
See also: 'Ritual destruction' of Iron Age warriors found
Thus far, they have uncovered one human skeleton and eight dog skeletons. The dog skeletons were found lying next to three tethering stakes, a discovery that could grant new insight into religious practices of the time.
“We expected great things of the excavations because a settlement, a burial ground as well as extensive offerings and sacrifices in the bogs around Skødstrup have previously been found. But these new discoveries more than live up to our expectations and the finding of a human skeleton is the crowning touch,” Per Mandrup, an archaeologist at Moesgaard Museum and the excavation’s director, said. The human skeleton belonged to a woman in her twenties. Photo: Jacob Due/Moesgaard Museum
See also: Danish Bronze Age girl may have been German
The human skeleton is believed to have been a young woman in her twenties. The bones were found in a heap within the bog along with two stakes, one of which had a sharp point. The archaeologists said that the jaw was the only thing that remained of the skeleton’s head, leading them to belive that the skull had been separated from the body.
The human remains have been transported to Moesgaard Museum for further study.
Archaeologists are also excavating the remains of a well-preserved large village, including a cobbled road and the foundation of homes.
See also: Danish burial mounds fleeced by grave robbers
Less than 200 metres away from the site of the current discovery is an Iron Age era bog that has led to many finds since the 19th century. Archaeologists have uncovered a human sacrifice, burnt human bones, 13 dog skeletons, a wooden phallus and a trove of weapons that had apparently been offerings to the gods.
“At Skødstrup, we have the whole spectrum of an Iron Age community: A well-structured village with an associated burial ground and sacrificial bogs. It gives us a unique insight into the life of Iron Age people in war and in peace, and not least a glimpse into their religious universe,” Mandrup said.