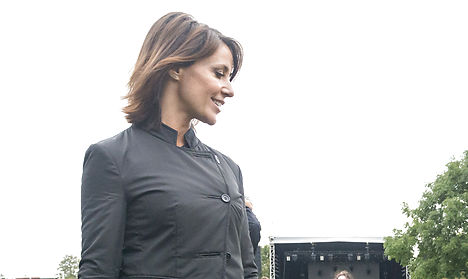 Royal watchers said the reaction to the Princess Marie story was "unprecedented". Photo: Torben Christensen/Scanpix
The new edition of magazine Her & Nu will carry a retraction and a public apology for a previous story that claimed that Princess Marie enlarged her breasts while in Lithuania over the summer.
“There is now a little bit more Marie. The 39-year-old princess went under the plastic surgeon’s knife to get larger breasts,” the magazine reported in its September 30th edition.
According to the magazine’s editor-in-chief, Erling Tind, Her & Nu was given the information from employees at the plastic surgery clinic reportedly visited by Marie.
Tind said that he was immediately contacted by The Danish Royal House, which demanded a retraction of a story that it contends is utterly false. Tind then went back to his sources, who firmly stood by the story. But he said the magazine agreed to capitulate to the royals’ demands because it couldn’t prove the report was true without revealing the identity of its sources.
“It is a principal decision that we would rather withdraw the story than reveal our sources,” he told tabloid BT.
See also: Breast implants growing in popularity in Denmark
Her & Nu’s new edition includes a retraction for the Marie story on page three, but the Royal House decided to take things a step further on Tuesday by sending out what a long-time royal watcher called a “sensational” press release which contained the full text of Her & Nu’s retraction.
“The Royal House informs us that H.R.H. Princess Marie has never visited the clinic in question and that the princess has furthermore never been in Lithuania,” the retraction and press release state.
Trine Larsen, a journalist who has covered the Danish royals for years, told news agency Ritzau that the official press release was an extremely unusual move.
“I cannot remember an official denial ever being released before,” Larsen said.
“I think it is because the magazine crossed the line and the princess feels it was a violation of her private life. [The denial] is definitely something the princess was involved in,” she continued.
Kirsten Sparre, who has studied the Danish royals at the University of Aarhus, also said that the decision to send out a press release was “unprecedented” and that the Royal House's strategy has backfired.
“This is unprecedented, particularly when you think about what the royals normally have to deal with in the press. So I wonder why they are demanding a retraction on precisely this story. And all it does is make it so that even more people are talking about it now,” Sparre told Ritzau.