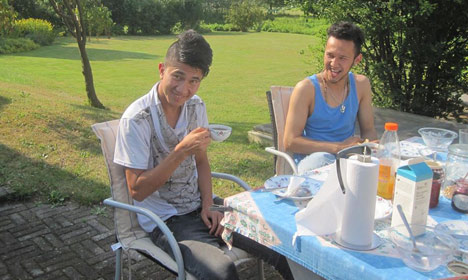 Abolfazl and Vahid Vazirir spent five years in Denmark before being sent out of the country. Photo: Lise Lomholt
Abolfazl, 16, and his brother Vahid Vazirir, 23, were sent out of Denmark at the end of June after their application for asylum was rejected. The two brothers had been in Denmark for five years and humanitarian groups and personal contacts warned that both young men suffered from psychiatric problems and were unlikely to be able to take care of themselves in Afghanistan, where they had no living family members.
Despite the objections, the Danish Immigration Service (Udlændingestyrelsen – DIS) ruled that the elder Vahid would be able to take care of the younger Abolfazl and that the brothers would be able to successfully adapt to Afghan society.
The brothers were detained by Danish police officers and held for more than 12 hours before being put on a plane to Kabul.
Shortly after arrival in the Afghan capital, the two brothers were robbed of all their money. The brothers’ Danish representative, Lise Lomholt, was then contacted by Vahid and told that the two brothers had gotten split up and that the whereabouts of Abolfazl were unknown.
In September, Lomholt said that Vahid and again contacted her, this time to say that Abolfazl had been killed. Over the weekend, Politiken newspaper successfully reached Vahid, who is now hiding in Iran. He confirmed his brother’s fate.
Vahid said that he was taken to a house where his brother was one of 20-25 corpses. All had been killed by the Taliban.
“He laid there with some other young boys who had been killed. All of them smelled rotten. I saw him and touched him. I was in the house for two days before I could get away again,” Vahid told Politiken.
He said that the Taliban had targeted his brother because they were Hazaras, Shia Muslims that make up Afghanistan’s third largest ethnic group.
“They knew that we are Hazaras, and they don’t like us. They also know that we come from Denmark. They asked all kinds of things: Why had we fled? They also asked about my parents,” he said.
Vahid said he was able to escape the Taliban’s holding place and is now in hiding in Iran.
Back in Denmark, Lomholt said that the brothers never should have been sent to Afghanistan.
“Vahid couldn’t take care of himself and take care of his brother. They didn’t have the network that’s needed to have a life in Afghanistan. The Danish authorities bear the responsibility for this going so wrongly, therefore it should also be their responsibility to get [Vahid] back,” she told Politiken.
Both DIS and the Danish National Police have admitted that it was a mistake to detain the two brothers before sending them out of the country. Both young men had voluntarily signed expulsion papers.
The Vazirirs have both been offered 9,800 kroner for what the National Police called their “illegal” detainment.
Lomholt said she is trying to get the money sent to Vahid but stressed that it “doesn’t change anything at all”.