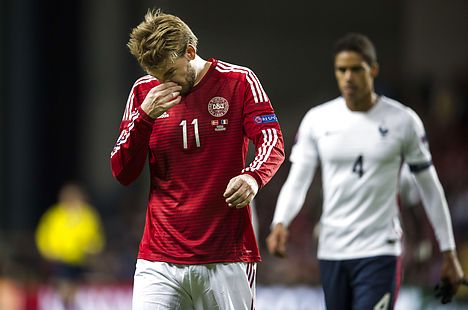 Denmark's forward Nicklas Bendtner (L) reacts as he leaves the pitch at half time during the friendly international match between Denmark and France in Copenhagen on Sunday. Photo: Odd Andersen/AFP/Sc
Denmark lost its chance to automatically qualify for Euro 2016 when Albania topped Armenia 3-0 on Sunday evening.
That result put Denmark in third place in Group I action, ending its hopes of automatically qualifying for Euro 2016. Instead, the Danes will have to compete in a playoff against another third place club yet to be determined.
Denmark will learn its playoff opponent in a draw on Tuesday and the two playoff games will be played in mid-November.
Denmark took on France in a friendly on Sunday night after they learned their Euro 2016 fate.
Arsenal striker Olivier Giroud scored twice in the first six minutes for the visitors as Euro 2016 hosts France defeated Denmark 2-1 in a friendly international in Copenhagen.
The win was a fourth in succession for Didier Deschamps' side although there are stiffer tests ahead for France, who tackle world champions Germany and England in November in their remaining 2015 assignments.
France made eight changes from the team which defeated Armenia 4-0 on Friday, but there appeared little disruption early on as they raced into a 2-0 lead inside six minutes.
Danish goalkeeper Kasper Schmeichel was at fault for Giroud's opener in the fourth minute and could have done better to prevent the second just two minutes later.
Erik Sviatchenko, with a superb effort, pulled a goal back in stoppage time for the home side.