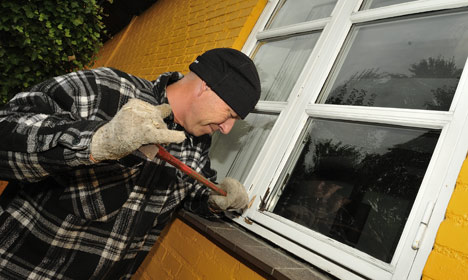 Break-ins are down, but so is the likelihood that the police will do anything about them. Photo: Colourbox
Denmark has seen a recent decrease in home break-ins but remains a European leader in the number of domestic intrusions.
In the third quarter of 2015, there were 7,561 reported break-ins, down from 10,092 in the same quarter last year.
See also: Denmark has second most break-ins in Europe
Even though the number of break-ins are down, so too are the chances of the police getting to them bottom of them – or even showing up to make a report.
“If you call and report a break-in and the perpetrator hasn’t left a direct trace, it will be one of the assignments that we ‘deprioritize’,” Michael Møller, the chairman of the Copenhagen Police Association (Københavns Politiforening), told Berlingske.
“We will take the report so that you can get reimbursed from your insurance but in all likelihood the case will end up in the ‘we’re not going to do anything about it’ pile,” he added.
Police spokespeople in other precincts across Denmark confirmed that they too have de-emphasized break-ins.
Berlingske reported that police solved 6.7 percent of the 36,342 break-ins in 2014, down from the 8.3 percent success rate in 2011. In Norway and Sweden, police solve twice as many break-ins according to figures from the Danish Insurance Association (Forsikring & Pension).
February’s terror attack in Copenhagen and its aftermath have led police districts to reprioritize their tasks and many districts have already complained about having to send so many officers to the capital.
See also: Danish cops overworked and undermanned
Officers with the Funen Police, for example, said earlier this summer that it has now become “relatively risk-free” to deal drugs on the island.
But the low priority given to break-ins can’t entirely be blamed on an increased focus on anti-terror police work, at least not in the capital. Copenhagen Police said as far back as last July that it only investigates thefts and break-ins when the value of the stolen goods exceeds 100,000 kroner. If the stolen items are below that amount, the police simply register the theft and do nothing more.
Justice Minister Søren Pind told Berlingske that he wants to ensure that Danish police have the necessary resources moving forward.
“It is no secret that the police have been under enormous pressure recently with guard duties in Copenhagen and handling refugees and migrants. Soon we will negotiate a multi-year deal with the police and it is my clear goal that the police are assured the resources needed for carrying out their assignments effectively and professionally,” Pind said.