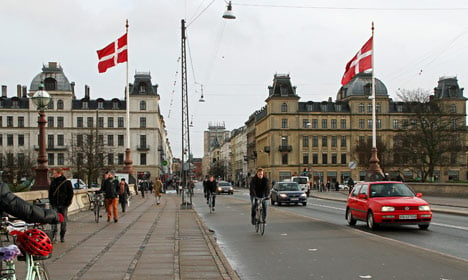 For at least one day next September, pedestrians and cyclists will get the city to themselves. Photo: Colourbox
After the success of similar events in cities including Paris and Stockholm, the Danish capital will ban cars from the city for one day next September.
The City of Copenhagen on Thursday voted in favour of implementing a car-free day next September as part of European Mobility Week. Although the date was not definitively set, it is likely to be the last Sunday in the month of September.
See also: Danes want pedestrians to use hand signals
The city’s deputy mayor for the environment, Morten Kabell, told Berlingske that he was inspired by the success of Paris’s recent car-free day, which saw tens of thousands of pedestrians and cyclists flock into city streets. The car-free day also reportedly cut emissions levels by as much as 40 percent compared to normal daily levels.
“In Paris, people suddenly realized how fantastic the boulevards are and how wonderful Paris’s urban space is when it isn’t filled with cars. We can do the same in Copenhagen. At the same time we can gather concrete figures on what air pollution would be in a large city like Copenhagen if the cars weren’t there,” Kabell said.
See also: Copenhagen rides to the top of bicycling world
Despite its “unrivalled” status as the world's best city for cyclists, air pollution in Copenhagen has exceeded the EU’s allowed levels for years.
Paris mayor Anne Hildago was so impressed by the success of the car-free day that she has announced plans to make the event even bigger next year and possibly expand it beyond just one day. That’s something Kabell said he would keep a close eye on.
“I’ve seen that Paris’s mayor has suggested that there could be a car-free day each month. We will start with the single day and see where that gets us but there is no doubt that Paris is a very good example for other European cities,” he told Berlingske.